According to the National Bureau of Economic Research, since World War II, 10 out of 11 price peaks in oil have resulted in a US recession.

This suggests that North America is likely to see a slow down, but what should that mean to investors? There are opportunities in such an environment, so the data leaves several questions on the table:

If we do enter a recession, how long is it likely to last?

Are recessions even relevant when picking stocks?

Has oil peaked — and where is it heading?

What can we look for in individual stocks’ price action, and how to know when it’s time to buy?

It is highly likely we will see a recession (based on history) in North America, but I will show how this can be a good thing for stock pickers. By looking at the price movement of individual stocks relative to major indexes, we get a glimpse at which stocks are likely to pose little risk and provide positive returns. While most energy stocks will move with oil prices in some fashion (either leading or lagging), there are always those stocks that outperform.

Given that the global economy is driven by oil, when oil prices continue to push higher it has a dampening effect on industrial production, transportation and even car sales, all which slow down the economy over the long-run. Figure one shows the oil price peaks and the resulting recessions over the last 40 years. 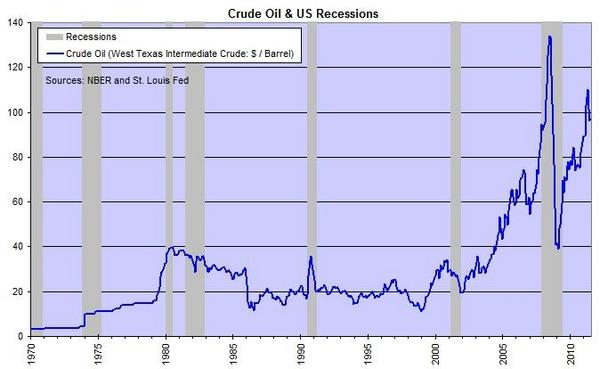 The last four recessions have lasted 8 to 18 months, with the average being 12.5 months. With GDP annual growth rates declining so far in 2011 for Canada and the US we could officially be in a recession quite soon. If we do enter a recession it is likely the economy will bottom and begin improving again in a little over a year.

Currently a pullback in stocks and the price of oil has already occurred. These are leading economic indicators; therefore stocks and oil will bottom before the economy does.

This bottoming action is crucial, as we will watch for bottoming patterns in individual stocks which can provide great entry points as the markets begin to recover.

Oil has been in an uptrend since 1999 even with the major collapse in 2008 (marked by line “4” in Figure 2 below). That uptrend I expect to continue. Oil is currently in a downward correction, trading at 87.68, down from a recent high of 115. I believe we are unlikely to see $115 for some time. Given that oil usually bottoms out toward the middle or end or end of a recession, subdued oil prices are likely for at least the next several months.

The drastic decline similar to 2008 is unlikely to reoccur though as the oil market was much less over-bought on the recent rise than in 2008. This indicates the current decline is likely to be more orderly. Figure 2 shows the rise in oil since 1999 marked with analytical trendlines. 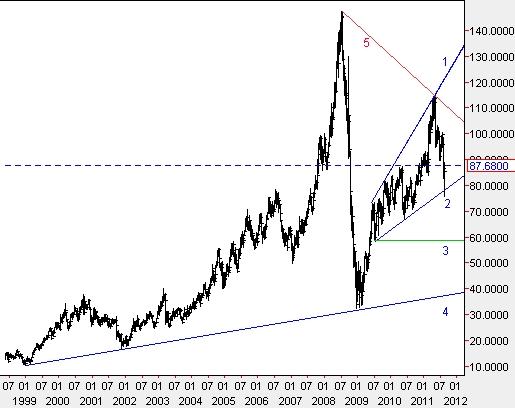 The chart provides three potential scenarios for the next few months:

If Light Sweet Crude Futures dip below $75 there is potential for further decline to support at $60 (line “3”).

Oil will move between resistance at $105 and support at $75. There is a downward sloping trend line (line “5”) which intersects near $105 and will provide resistance, while the area between $75 and $60 (lines “2” and “3”) will provide support. I see this as the most likely scenario.

A rise above $115 indicates strong demand, a recession is not happening yet and oil will move towards resistance at $130-135 (projected target based on the angle of line “1”). In the short-term this is unlikely, but over the long-term (a year or more down the road) it is highly likely.

Having some insight into what Oil may do is nice, but it’s how individual energy stocks act in relation to oil that’s important.

This is what creates buying opportunities in stocks – if you are selective and wait for the right signals.

NEXT STORY:  Part 2 — What to look for in individual stocks, the phenomen of “relative strength,” and also a great example from the Oil & Gas Investments Bulletin portfolio… a company that has performed better (in percentage terms) than oil and the TSX Composite over the last year.

Disclaimer: The information provided is as of the date above and subject to change, and it should not be deemed a recommendation to buy or sell any security. Trading involves substantial risk and may not be right for everyone. Certain information has been obtained from third-party sources we consider reliable, but we do not guarantee that such information is accurate or complete.