The share prices of oil service companies have outperformed the share prices of large-cap oil and gas companies’ common shares since the broader stock market indexes started to move higher at the start of September.  The unit price of the Oil Service Holders (OIH-NYSE, $138.52) exchange traded fund (ETF) has increased about 39% since September 1, compared to a 34% price increase for units of the Energy Select Sector SPDR Fund (XLE-NYSE, $67.22) ETF.  Interestingly, oil prices have only increased about 21% in the same time frame, which is almost identical to the move experienced by the S&P 500 Index.

There are several other ETFs that track the shares of oil and gas producers and services companies, although those other ETFs do not experience the same magnitude of trading volume as the XLE and OIH ETFs.

The XLE ETF tracks the shares of U.S. large-cap oil and gas companies with recent trading volume about 10 to 20 million units per day.  This ETF has a heavy weighting of Exxon Mobil Corp. (XOM-NYSE, $72.80), which significantly influences the direction of the ETF.  Since XOM has lagged the XLE ETF during the last several months the recent influence has been a drag on the ETF’s performance.

The OIH ETF tracks the Philadelphia Oil Services Index (OSX, 242.22), which is comprised of the shares of U.S. large-cap oil and gas service companies.  Recent trading volume is about 4 to 5 million units per day.  This ETF includes oil and gas service companies such as Schlumberger Ltd. (SLB-NYSE, $82.81), Halliburton Co. (HAL-NYSE, $40.41) and Baker Hughes, Inc. (BHI-NYSE, $56.76), which have all outperformed the OIH ETF since Sept. 1.

The comments below provide a technical analysis of these two ETFs in terms of the current price chart pattern that each ETF’s price action has formed and their relative performance against each other, but first a refresher on support and resistance levels.

As you can see in the chart below, except for the big pull-back in the spring of 2010 after the BP Amoco PL (BP-NYSE, $43.61) gulf oil spill, the OIH ETF has outperformed the XLE ETF since Dec. 1, 2009.  The trend lines on the ratio of the OIH unit price to the XLE unit price as well as the RSI and OBV technical indicators favour continued outperformance by the OIH ETF, but breaches of those trend lines may change the bullish outperformance case for the OIH ETF. 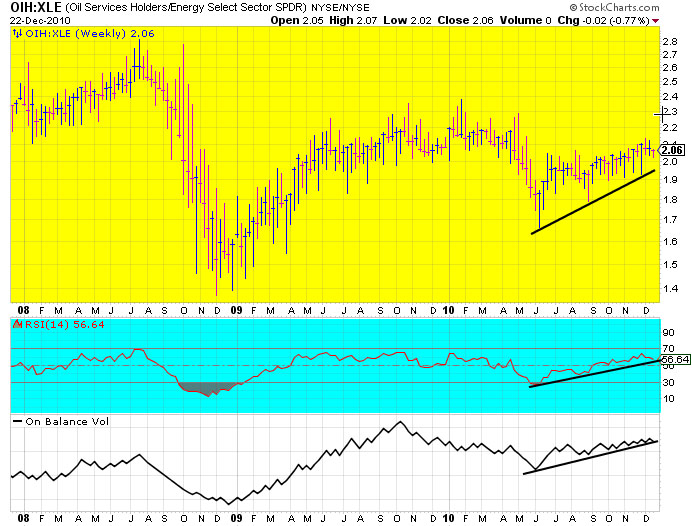 XLE’s unit price bounced around a price range of US$50 to US$60 during the period August 2009 to October 2010, and managed to penetrate the US$61 resistance level in November 2010, which has become the support level.  The unit price has traced out a fairly steep rate of ascent, which is unlikely to be sustained, although the move above US$67 has confirmed the breakout.  The bullish trend may continue through the winter months should XLE’s unit price find support at US$61 and then make some higher highs and higher lows. 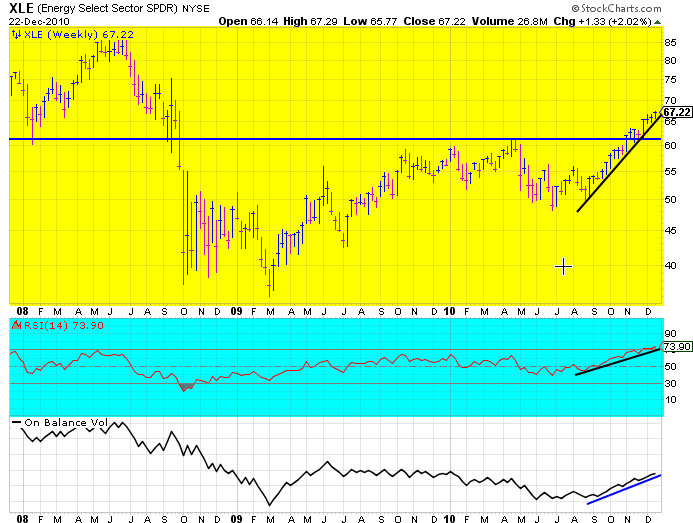 OIH’s unit price has bounced around a much wider US$90 to US$130 price range during the period August 2009 to November 2010, which is quite volatile.  The unit price managed to penetrate the US$130 resistance level in November 2010 and has also traced out a fairly steep rate of ascent, which is unlikely to be sustained.  The bullish case for oil services companies outperforming oil producers is strengthened should OIH’s unit price confirm a breakout with a move up to US$143. 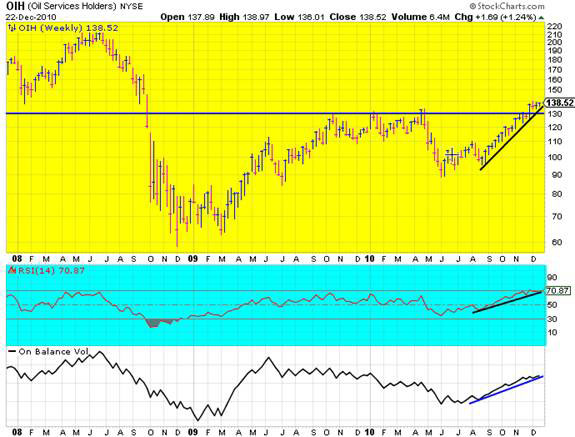 Notice how the resistance level of each ETF was breached in April of 2010, but the unit prices quickly dipped below those levels quite substantially after April.  Essentially, the sellers became more powerful than buyers and stopped those advances.  Recall that there was general market weakness in May.  These false break outs, or whip saws, have a greater probability of occurring if the price movements are less than 10% above the resistance level.  Normally, a break out is confirmed by a 10% price move above the resistance level, although with penny stocks you would generally want to see at least a 20% price increase to confirm a break out.

There significant short interests in both ETFs’ units (i.e. 40 million, or 35.6%, of XLE’s 112.4 million outstanding units and 6.5 million, or 36.1%, of OIH’s 17.9 million outstanding units), so a short-covering rally could take their unit prices considerably higher, although the unit prices will not diverge much from the net asset value of underlying market constituents of each ETF.

The broader stock market is due for a pull-back, which could take the XLE and OIH unit prices to their support levels, which would provide low-risk entry points.  For OIH, a move to US$143 first to confirm the breakout would improve that ETF’s technical outlook.

Disclosure: I don’t currently own any units of either the OIH or XLE ETFs or common shares or debt of any of the companies mentioned in this article.

Brian Hoffman, CA, CPA, is a member of the Canadian Society of Technical Analysts (E-mail: bk.hoffman@rogers.com).