Fracking has helped the United States maintain the world's number one economy, but the exploitation of unconventional gas is also catching the eye of the world's second largest economy: China.

China's Ministry of Land and Resources geological exploration department head Peng Qiming said that his country intends to produce 360 million tons of oil equivalent in 2015, a 23 percent increase over the 280 million tons that was produced in 2010. By 2030 Peng says the country hopes to up that total to 450 tons, reports OilPrice.com.

One way that China hopes to accomplish this goal is through the use of hydraulic fracturing, or fracking. The news provider reports that by 2020 the country is hoping to produce 80 billion cubic meters of natural gas a year, which will likely need to be accomplished through fracking.

China has already flexed its muscle on the international energy production stage.

In October the Chinese-state owned Sinopec took over Calgary-based Daylight Energy (DAY:TSX) for $2.2 billion, which analysts believe was an indication that the country plans to move into unconventional gas production.

"It seems that Sinopec is potentially eyeing longer-term development of those for [liquefied natural gas] exports to the Asia-Pacific market, building on what Canadian companies are trying to do," Neil Beveridge, a Hong Kong-based analyst with Sanford C. Bernstein & Co, told the Calgary Herald.

China has shown a great deal of interest in a number of companies that might have undervalued assets, with at least two other companies being taken over or bought into for billions in the last few years.

According to the news provider, Encana Corp. (ECA:CN) is another possible target for a takeover, along with Vero Energy (VRO:CN).

"We have seen numerous investments in the Canadian oilsands and now we're starting to see the Chinese get more and more involved in the shale gas opportunities, and at some point in shale oil," Lanny Pendill, with Edward Jones, told the Star. "They've done it in oil and now we’re seeing it in gas and I would not think that this is the end of it."

One place in China where a large amount of investment in shale gas might come is the Sichuan basin, a 81,500 square mile area where natural gas was first exploited in the country, according to the EIA. The region has a developed network of pipelines to carry the natural gas along with a number of potential industrial markets for the fuel source in the area. In addition, there are a number of well drilling services in the region.

Preliminary data obtained by the EIA shows that the shale in the Sichuan basin has low clay content, making them potentially prime candidates for fracking. But at the same time the U.S. agency warns that the complex structure of the shale also poses risks.

The main targets within the Sichuan shale are Silurian- and Cambrian-aged formations, according to the EIA.

While the shadow of the dragon begins the loom over the sector, America hasn't hesitated to give (or at least give the appearance of) help to China in terms of shale gas production. In 2009, President Barack Obama met with Chinese President Hu Jintao and the U.S.-China Shale Gas Resource Initiative was launched, which is intended to allow China to share technology related to shale gas extraction. 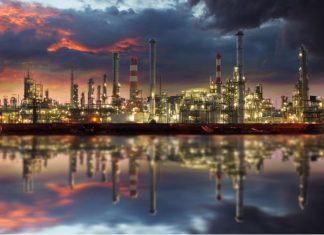