I’ve got some data for you that is surprisingly bullish for oil.

Even more surprising is what that data relates to, those bloated U.S. oil storage levels.

The data I’m about to specifically shows you details the movement in amount of oil that the United States has in storage this year versus recent history.

All of the information comes from the EIA and you can access it through this link:
https://www.eia.gov/dnav/pet/hist/LeafHandler.ashx?n=PET&s=WTESTUS1&f=W

First, I want to show you is the amount of crude oil and petroleum products that the United States has in storage (excluding the Strategic Petroleum Reserve).

This includes crude oil as well as gasoline, diesel, jet fuel…..and so on.

The bottom line in the table below shows the change in the number of barrels in storage from the first week in January to the lastweek in June for each of the last six years.

Historically inventory levels build in the first half and are drawn down in the second half which includes the busier summer driving season.

You can see that this year has had by far the smallest build in crude oil and petroleum products inventory levels.  The chart below makes that even more apparent. 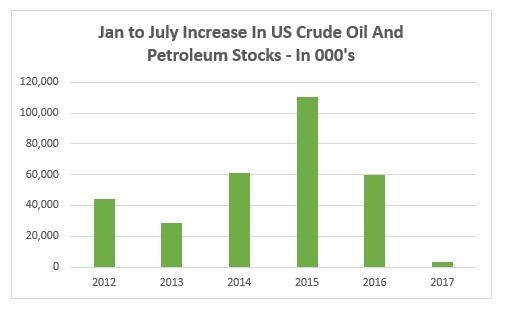 The movement in U.S. total storage unquestionably looks a lot more bullish in 2017 doesn’t it?  This year’s movement even looks considerably more bullish than the pre-glut years of 2012 and 2013.

I’m not cherry picking data here for the sake of a story. What happens if I take petroleum product inventory levels out of the mix and just focus on crude oil storage?

Also bullish, as the table below shows.

Note that this data includes the Strategic Petroleum Reserve.

Because of that the numbers are larger than you would typically be used to seeing if you were just looking at crude inventories excluding the SPR, but it doesn’t change the story.  If we were to exclude the SPR the trend would look very similar.

Again, a nice little bar chart really brings forth how much more bullish the inventory change is this year relative to recent years. 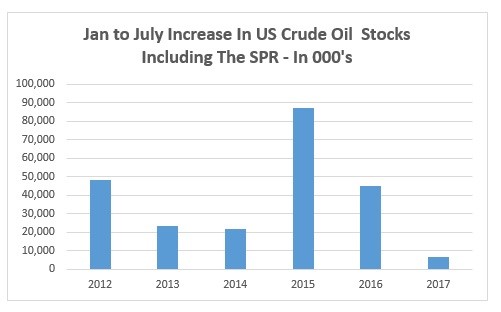 2017 has the lowest first half crude inventory build by a significant margin, and is a fraction of the past two years.

You have to admit that these particular pieces of data would have to be considered encouraging for oil prices.

The Data Would Have Been Even More Bullish Without OPEC Dumping

The EIA data is bullish.

The plot thickens further when you consider what Saudi Arabia and OPEC were busy doing during the first half of 2017.
As you likely are aware, last fall OPEC and Non-OPEC producers agreed last fall to reduce production by 1.8 million barrels per day starting on Jan 1, 2017.

Compliance with those agreed cuts has actually been very high, almost 90 percent.  OPEC by itself (and especially Saudi Arabia) has actually exceeded its targeted production cuts in March, April and May. 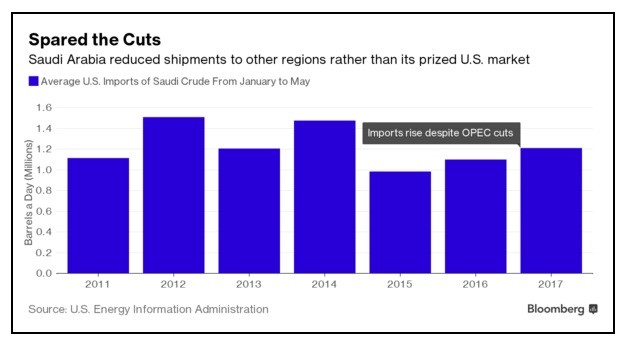 That means that first half 2017 U.S. oil storage levels are much more bullish than normal despite no help from the OPEC production cuts.

All of those production cuts are impacting global inventory levels, not levels in the United States.

Had Saudi Arabia not chosen to work down its own inventory levels in order to increase shipments to the United States the already bullish EIA inventory levels would be even more encouraging for oil bulls.

First Half Inventory Movements Were Bullish, But What Comes Next?

Don’t mistake me showing you this bullish data for me pounding the table about oil prices rising.
I don’t know what is going to happen.

Shale production is surging again and has done so without oil prices having pushed much past $50 per barrel.

And those OPEC cuts…..who knows how long they will adhere to them?

At some point the lack of results in terms of a rising oil price has to be weaken resolve.

Throw in a rebound in Nigerian and Libyan production and figuring out where oil I going becomes more complicated than ever.