Kinder Morgan Canada – Is This Now A Sucker’s Bet?

If the Trans Mountain pipeline expansion from Alberta down through B.C to Vancouver goes ahead as planned, then Kinder Morgan Canada (KML-TSX) will probably be a decent investment at current prices.  I run through some math with “one-foot-planted-firmly-in-the-air” below and come up with a potential 50% return from here–in just over three years.

That is actually better than what the Market expects from capital intensive, yield paying, energy infrastructure plays.

On the other hand, if the Trans Mountain pipeline expansion does not proceed or is significantly delayed–which is now likely the case without a pro-business government in Canada’s most western province–then Kinder Morgan Canada is not going to do well by investors.

In fact it could do very poorly.

With an unfriendly government soon to be in power, the range of outcomes is now where the best case scenario is average/mediocre and the worst case could be awful.

This is the kind of asymmetric bet that only a fool could love.

For Canada’s Oil Industry – This Pipeline Is Vitally Important

Economically, the Trans Mountain expansion looks like a windfall for Canadians.

An economic stimulus package and enormous source of tax revenue all rolled into one.  It would be good for the economy and good for the taxpayer.

Here is what the pipeline is going to generate for Canada, British Columbia and Alberta during the construction phase and over the first 20 years of operations:

For the oil industry the pipeline isn’t just a good thing, it is absolutely crucial.

This is a desperately needed solution to get adequate pipeline capacity in place to meet rising production.  Without it Alberta oil producers have major problems. 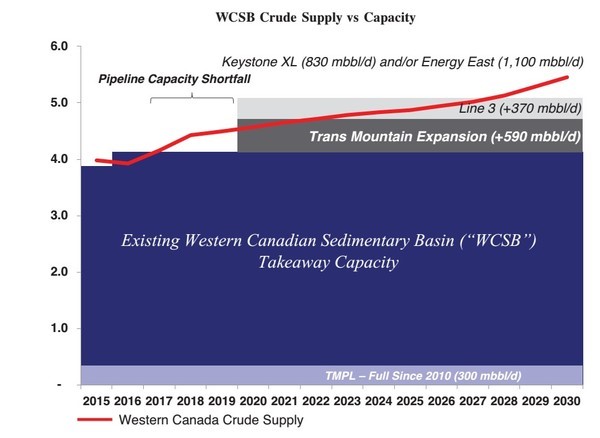 But recently, things have gotten a lot more complicated.

Three weeks after the May 9 provincial election, on May 29, 2017, the B.C. Green Party agreed to support the NDP (The New Democratic Party; the national left wing party in Canada) in the legislature.  Doing so gives the NDP the support of a total of 44 members (their 41 members plus 3 Green members).

That is one more than the ruling Liberals which have 43 seats, and effectively ends their government–at some near term point.

The BC Green/NDP agreement was really bad timing for the stock of Kinder Morgan Canada–their $17/share IPO was on the same day, May 29.  The stock never traded that high; investors have lost money since Day 1.

That Liberals now have two basic options.  Either resign (hand over power) or requesting to dissolve the legislature and hold another election.

While Trudeau and the Federal Government do officially have the power to push the pipeline through, consensus is that the Prime Minister would do serious damage to his political brand by doing so.

Is backing this pipeline worth that career damage for him?

Since the NDP/Green announcement, Trudeau has reaffirmed his support for the Trans Mountain by saying that the facts were his basis for approving the pipeline haven’t changed.

Whether he is willing to actually fight for it (which he will undoubtedly have to do) remains to be seen.

That leaves Kinder Morgan Canada and its shareholders in a complicated situation.

Scenario One – Pipeline Gets Built

The total cost of the Trans Mountain expansion is estimated to be $7.4 billion.  $1.2 billion has already been spent and there is another $6.2 billion to go.

The funding of all that cash is expected to come through a combination of an existing credit facility, term debt and the issuance of preferred equity.

The addition of a $7.4 billion pipeline is a huge step change in operational capacity and earnings power.  This isn’t a “tack-on” asset for the company, the Trans Mountain expansion is basically going to become the company.

The chart below shows what the assets of Kinder Morgan Canada are generating now for EBITDA and what they will generate with the Trans Mountain expansion. 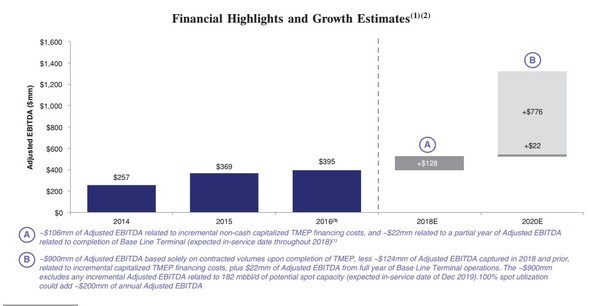 You can see that Kinder Morgan Canada goes from $395 million in EBITDA with its current cash generating assets to $1.3 billion with the Trans Mountain expansion up and running.

As I said, the Trans Mountain expansion will become this company.

Kinder Morgan currently trades at 14 times 2016’s EBITDA–which is hardly a bargain.  On projected 2020 EBITDA levels however the valuation looks better even with all of the additional debt and preferred equity that will be required factored in.

If the pipeline (miraculously) goes forward as planned without any real delays, shareholders should make out great from current share prices.

I did some very back-of-the-napkin math on the 100% ownership of the assets in KML. If EBITDA (fancy acronym that basically means cash flow) is projected to be $1.3214 billion, and it trades at 12x EBITDA, that’s an Enterprise Value of $15.8568 billion.  (TransCanada now trading at 11.9x and Enbridge at 11.5x and Pembina Pipeline at 12.1x)

Subtract $5.7 billion net debt for a market cap of $10.1568 billion.  Divide that by 395 million shares (remember that parent KMI-NYSE still owns a majority interest; KML is a minority holding of the assets) and I get and debt of $5.7 billion, I came up with a rough estimate of $25.71 per share by the end of 2020–if everything goes perfect.

That’s a gain of 55% in three years from a big infrastructure play–that’s not bad.  But that’s if everything goes perfect, and now that the pro-business BC Liberals did not win a majority, we know there won’t be much perfect about this Trans Mountain expansion.

Nobody would go into a company like this expecting to knock the lights out.  Investing in the capital intensive pipeline business is generally not one that is expected to produce large growth stock like returns.

Scenario Two – The Project Doesn’t Get Off The Starting Line

The best case scenario is a decent, but not spectacular investment return.

What do Kinder Morgan Canada investors get if the NDP/Green group are successful in shutting the project down?

The answer to that really depends on how much cash Kinder Morgan burns through on the Trans Mountain before it becomes clear that it won’t be completed.

If Kinder Morgan were to sink another couple of billion dollars into the project and then have an unexpected court ruling put a halt to it…..well that would be a disaster.

If that happened the company would have billions of dollars invested in assets that aren’t going to ever generate a nickel of revenue.  Worse still, that cash was all debt financed so the company will need cash flows to offset that leverage.

Remember such a scenario is not unprecedented.  It is a very possible outcome.

TransCanada Corp (TRP:TSX/NYSE) took a $2.9 billion write-down of the Keystone XL in the fourth quarter of 2015 when President Obama blocked the pipeline.  That was very real money that would have been effectively flushed down the toilet without the surprise Trump victory.

TransCanada is a very large company and that write-off hurt.  For the much smaller Kinder Morgan Canada, a similar write-off would hurt a lot more.

While I wouldn’t pretend to know what the end result of the Trans Mountain expansion will be, I do know that there is a very real chance that it doesn’t get completed.

Not being cancelled entirely is not the only risk.  The project could also many delays (perhaps lengthy ones) which could push the ultimate cost of building far in excess of expectations.  And it will only take one lengthy delay for the Market to permanently penalize the valuation of KML-TSX due to perceived increased risk in getting Trans Mountain complete.

I am fairly (sad and) certain that it will face fierce opposition until the bitter end.

As an investor I’ve learned to love asymmetric opportunities.

I’m talking about cases where there is very little downside and a whole bunch of upside if things work out as expected.

Kinder Morgan Canada now looks like the exact opposite of this to me.

If project development with Trans Mountain goes off without a hitch, then investors at current prices will generate an acceptable return.  If complications arise, the project gets delayed or even cancelled investors are going to poorly…..or worse.