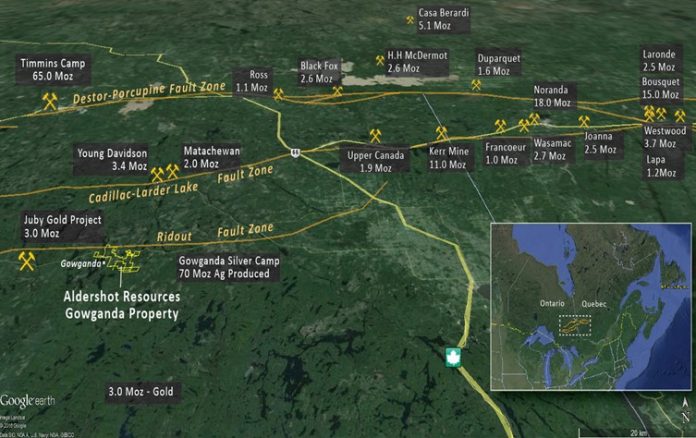 The Best Route to 2 Million Ounces Gold?
Start with 500,000 oz–in the Abitibiti Greenstone

One of the most important questions I ask myself as I look at a junior gold play is…how fast and how easy will it be to get this property to two million ounces?

Having a gold story with that kind of potential is key to getting institutional money and fast development. Two million ounces makes it a take-over target for every intermediate, large and multi-national gold producer on the planet.

The quicker and easier the path, the more interested I get.  I’m not trying to make it sound easy–it’s not.  That’s a big number, so the property has to be BIG.

And to get there quickly, it has to already have a resource on it.  Drilling out 2,000,000 ounces of gold from a new discovery takes A LONG TIME.  Just doing the drilling to find out if there is a large gold-bearing structure and how it dips & strikes…years.

My early 2020 gold pick Fosterville South was like that.

While its properties didn’t have a formal resource, they were in a known gold camp (in Australia) with lots of historical high grade production on them, and they sat on the same geological trend as a deposit that turned out 2 million ounces of gold at an ounce a ton.  The simplest and best analogy was right next door.

I’ve never seen an asset package grab investors like that–and the stock ran from its 40 cent IPO to $5 in three months.

Now, I’ve found the junior that I think could quickly develop a multi-million ounce gold deposit.
This junior is buying 100% of an asset in the prolific Abitibi Greenstone Belt that straddles the Quebec-Ontario border –that already has a 2011 43-101 indicated resource of 360,000 oz gold and an inferred resource of 247,000 ounces.

This junior is acquiring a big property, but what most interests me is the simple and somewhat narrow 6 km strike length that holds all those ounces.  It’s in three pods, all in a row, each separated by just a few hundred meters.

That high grade underground potential–which has been so prolifically developed and mined for over 100 years now in the Abitibi–is what this company is after.

In the last big junior gold cycle ending in 2011, the Market wanted open pit mines with bazillions of ounces.  And that’s what the previous companies tried to give investors.  They drilled 50,000 meters, ran kilometers of geophysics and have thousands of soil samples.

They weren’t wrong per se–but they didn’t feel the Market would give them credit for high grade underground ounces.

There is an incredible amount of data this company can use to implement their strategy.  They have a resource already, and a 6 km strike length that’s open at depth.

Now they are in the lucky position where, with a small amount of drilling, they could potentially connect the three dots into one very large Abitibi-style multi-million ounce deposit.

Again–folks, this is not easy.  For something like this to come together and actually realize its potential…well first off, the gold has to be there.  While we have some very strong indications, nobody knows.  All exploration has to be considered high risk.

But having a resource already and understanding the geologic structures SURE HELPS A LOT!

And as I’ve said, the right team has to come along with the right model and raise the money to drill in the right places…I hope you get how hard this is.

That’s why I got even MORE excited when I made a discovery–the geologist planning the drill locations has already developed a multi-million ounce deposit in Canada.

If you’ve been reading my stories for a long time, you know one of my favourite lines: The most valuable commodity on earth is–good people.  I am so confident that this geologist will give investors the best shot possible at finding whatever gold is there.

(And I really liked that he could explain what he wanted to do in simple English.  When investors hear this guy talk, they’ll “GET IT”.)

Now, everything I’ve just told you is about mitigating risk.  Get a property in a known gold camp. A big property.  Preferably one that already has several hundred thousand ounces. Get a top notch geologist with a proven success under his belt.

Now here’s where I tell you when I got greedy–a public company with just over 20 million shares out is earning a 100% interest here.

(They don’t even have to pay for it all up front!  They get to issue some of the cash and shares years from now! Of course, by then I’m hoping they’ve discovered a major deposit and that will be a pittance.)

So, tight share structures tell me two things.  One is that management respects their shareholders. They don’t dilute or issue shares for just any reason.  Second–a major discovery can make the share price go a lot higher in a 20 million share company than one with 200 million shares out.

DO NOT MISS MY EMAIL TOMORROW!!

If you find a 2,000,000 ounce gold deposit in the Abitibi, many buyers will be knocking on your door.  Producers love operating mines here.

And Canada has given gold miners a big gift in the last decade–a much lower dollar, which means higher profit margins.  Back in 2011 when the 43-101 compliant resource on this property was done, gold was US$973 an ounce, and the greenback and the loonie were almost at par–$1.02 to be exact.

The potential here for investors is quite remarkable.  With three known gold pods already holding a 2011 43-101 indicated resource of 360,000 oz gold and an inferred resource of 247,000 ounces, a major discovery could take much less time and money than a grassroots property.

In my email to you tomorrow, I’ll tell you:

1 – the details of this Abitibi gold project
2 – the name and pedigree of the geologist planning out all the drilling
3 – and of course, the name and ticker symbol of this micro-cap company (which has about 13% insider ownership + 15% friends/family) who will be going full bore through winter in their first drill program as they earn into 100% of this gold project.