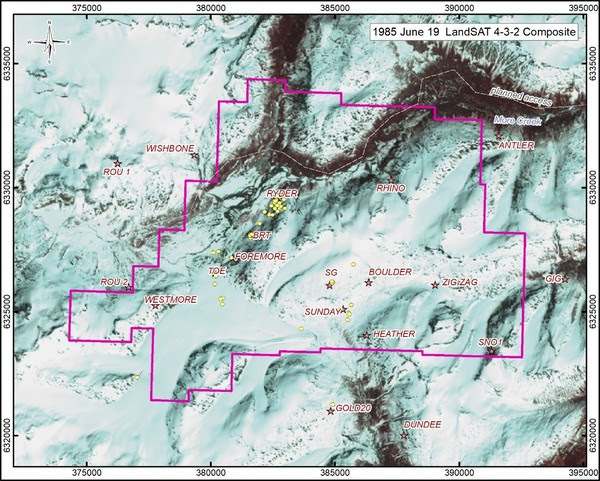 One of the greatest gold plays of all time is being re-born—thanks to global warming.

Back in the late 1980s, Calpine Resources soared to $72 a share in months after discovering an incredibly high grade gold deposit called Eskay Creek.

Nearby stocks ran up to $10 on “close-ology”, as investors wondered where other deposits would be found.   It was one of the largest “area plays” in junior mining history.

The Eskay Creek Mine produced gold at over 1.5 OUNCES per ton for 15 years.

Now, years later, the few mines that were discovered during that heyday have all closed, and the play has sat relatively dormant.  That’s a bit surprising—considering the tens of millions of dollars spent there.

But The Golden Triangle isn’t done.  Far from it in fact.

And here’s what it took to resurrect this famous play: GLOBAL WARMING.

I am not making this up.

The emerging story on this stock and the Golden Triangle is simple.

You don’t need to be a rocket scientist to understand what is happening.  With glaciers and snowpack disappearing in the Golden Triangle world class prospects that should have been drilled decades ago have emerged.

For decades these prospects have been hidden deep under the permanent cover.  As this cover disappears the geologists can now stand directly on the ground and see with their eyes what has been hiding for ages.

Satellite images from the Golden Triangle stock that I’m going to tell you about tomorrow show the dramatic recent change in snow and glacier cover on their property.

There isn’t much to see here.  Just snow, snow and more snow.

You can clearly see that almost all of the historic drilling activity was centered on the areas that weren’t permanently covered by snowpack or glacier.

Everywhere is was left untouched because there was no visibility on the potential.

Now here is the same satellite view from last summer…. 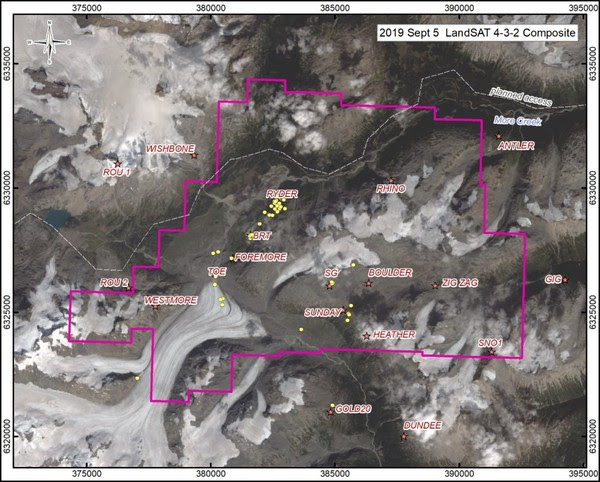 The change is incredible to behold.  Virtually all of this melt has happened over just the past few years.

The blinds that have long covered the eyes of geologists have been removed.  All kinds of virgin potential in the core of the Golden Triangle has been revealed.

They say a picture is worth 1000 words.  Let’s hope it is worth a few million ounces of gold too!

And of course, I have a favourite exploration company in the Golden Triangle that has already come up with a great discovery—right at surface.

On their specific property, the potential was revealed last summer.

That is when the lead prospector for this team found—chipped from a quartz vein where the snowpack had previously been—a sample that contained 4 OUNCES per tonne of gold.

In fact, six samples were taken from the vein that was discovered. The grades were amazing…..up to 125 grams of gold and 1,900 grams of silver per tonne.  That is a rich vein that—by itself—could be a very big deal.

Folks, that is NOT a subtle clue about the potential of the property—or where to start drilling.

This rock was the equivalent of a flashing neon sign pointing to the ground and screaming “Drill Here Now”….which is exactly what this company is doing RIGHT NOW.
I’ve Never Seen A Junior  Move This Fast
Finding that big rock loaded with high-grade gold on a piece of land that nobody has explored before inside the Golden Triangle is nirvana for a geologist.

That gold didn’t fall from the sky.  It came from the ground…..which means there is also high-grade source to be found.

At these grades the source doesn’t even have to be big to be extremely valuable.

Like most of the really big high-grade discoveries inside the Golden Triangle, this prospect is at high elevation and above the tree line where the rocks are exposed.

There hasn’t been a single drill hole into this area.  So any high grade gold intercept here will be treated as a major discovery.

This team is moving fast.  Not only are they already drilling, they are expecting their first set of assays back VERY soon.

This company has only been publicly traded for a couple of months.  There’s no tired shareholder base—everybody is excited!

After the team found this high-grade rock sample last summer, they did a lot more sampling where the glaciers and snowpack used to be.

This summer the follow up work has been rolled out at a staggering pace.  What the team has discovered so far is a very large area that has systemic, regular spacing of quartz veins throughout, that all have the same hallmarks as the ultra high-grade vein from last summer.

The pace of work accelerates…… and more than 900 additional samples have been taken.  The lab results on all this is pending.

That is where we stand today…

Suddenly we have a fresh grassroots discovery that has only had a total of 3 months field exploration work, but is already rapidly advancing into a drilling discovery.

This is breakneck speed relative to how these projects normally move forward.

Now dear reader, all this is very bullish of course.  They have a lot of high grade samples at surface.  They see multiple veins. They see a big structure.

But this is exploration – and VERY few properties turn into a mine.  The odds are actually astronomical.

And A LOT more drilling is required here to know what the potential really is.

But I will say, these free stock picks I’m giving out have done REALLY well this year.

Fosterville South hit good grades and the stock soared.  So did Vizsla.  So did Kodiak Copper.

Even Summa Silver came out with huge grades—just one day after I profiled it last week.

I get pitched a lot by promoters and CEOs.  I know the good teams, can tell who knows their stuff and who respects their shareholders (by keeping the share count low and not issuing themselves 100 million shares).

I do my best to pick the best. This company has only 30 million shares out.  The CEO used to manage 1800 people.  The VP Exploration has added incredible value everywhere he’s been in his long career.

The Most Leverage To New Grassroots Golden Triangle Discoveries

For years the work done in the Golden Triangle has been focused on trying to bring old properties back to life.

Now a new era is upon the region.  The disappearance of the snowpack and glacier coverage could mean multiple new grassroots discoveries.

That is important……because it is a grassroots discovery that creates immediate stock market value for shareholders.  That is when a company goes from having nothing to suddenly having something of considerable value.

This particular stock has just a $30 million market cap —— just a fraction of what Golden Triangle competitors with successful discoveries carry today.

This is a tiny company that is hunting big game.

This leverage to the emerging Golden Triangle grassroots story is clearly what attracted this company’s overqualified CEO to the venture.  His resume is far too large for what you would expect to see at a ground floor exploration stock.

This CEO was in charge of an 1,800 person operation and an annual budget of more than half a billion dollars for a global mining company.

He’s here for the equity—The Big Win if they find a discovery.

He oozes credibility…..the entire team does.

And the CEO is excited—he personally jumped in his truck and drove the core from the first drill hole to the third party lab—a 15 hour drive—for analysis.

We don’t know the results of that lab analysis yet.  That information is something that the market is going to learn about in the coming weeks.

No guarantees but either way that news will be impactful.

There is no better place in the world today to make a grassroots discovery than the Golden Triangle.   High-grades deposits are everywhere including freak of nature discoveries like Eskay Creek.

The region has all of the infrastructure that a new discovery needs.  That makes every ounce discovered even more valuable.

Junior gold exploration is not a riskless venture.  Far from it and that applies to every company in this line of work.

Having said that there is no Golden Triangle stock that I’d rather own than this one which is going to be providing drilling assay results soon.

This is what I do.  I find these stories before they have big runs.  This stock has only been listed for a couple of months and there is no success yet built into the share price.

Tomorrow I tell you everything you need to know about this company:

This is a new listing.

This is ground floor.

The news flow is coming soon.

There are billions of dollars that are going to be discovered in the Golden Triangle in the next five years.

This stock has a tiny market cap and an incredibly interesting looking project right in the middle of the action.  Results are coming soon on 800 surface samples and first drill holes, all of which were shooting for  high grade gold. 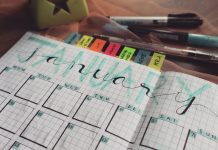 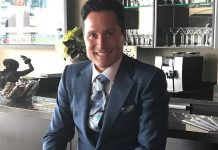