Home Latest Reports Could US Oil Production Get A Risk Premium with Elizabeth Warren?

I’m not going to try and forecast the 2020 election at this point.

Not with impeachment, Ukraine, Biden’s son, quid pro quo, Michael Bloomberg and who knows what else between now and then.

But a chart I found today made me think of what would happen if Democrat Elizabeth Warren wins the White House exactly one year from now, in November 2020.  This chart shows how important fracking is to US oil production: 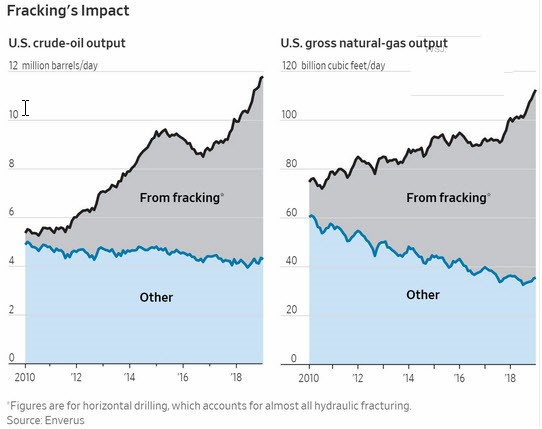 Climate Change is a major issue for her and her voting base.

Elizabeth Warren is on record as saying that on her first day as president she intends to completely ban fracking — EVERYWHERE.

Here it is, straight from the horse’s mouth…

That is concerning, although it is hard to say how doable it is for her.

Without an act of Congress, the President could not issue an outright ban on fracking across the US. There are however a number of regulatory and executive actions an administration could take to prevent or shrink the use of fracking technology.

Even if she can’t ban it, she can surely slow it down.  Perhaps even make it economically unviable.

If you think this is crazy talk, note that the state of California just ordered a review of all pending fracking in the state AND halted steamflooding — a secondary recovery method to increase production from old oilfields (mostly worked on conventional, non fracking fields).

The hit to the economy would be enormous — tens of thousands of job losses, especially in the western states, and WTI oil prices would jump 50% in a week.  The stock market would crash, sending the world into a global liquidity crisis — for a while.

But if you’re an investor in Canadian oil stocks, you will have the best year of capital gains in a long long time!

Her Election Chances Look As Good As Anybody

There was point in time where the idea of someone as far left as Elizabeth Warren winning anything was far-fetched.

Today she isn’t even the furthest left of the serious Democrat contenders — although far left she most certainly is relative to what we are used to from nominees.

Former US President Barack Obama is so concerned about an Elizabeth Warren nomination that he recently came out of political retirement to remind his flock that going too far left would be a bad idea.

Warren is currently neck and neck with Obama’s buddy and former VP Joe Biden in some polls.  Second place in almost all of them.

Can she beat Biden?

If you combine her supporters with the Bernie Sanders brigade, she has a realistic  chance at the nomination.

Realistically, the Democrats aren’t going to nominate Sanders.  He is 78 years old and just had a heart attack.

His campaign proposals are truly radical, he wants to overhaul nearly every institution and industry in the country.

In many cases, his proposals are further to the left than even movements on the ground have called for.

Warren is no spring chicken at 70, but next to curmudgeonly Bernie she seems barely middle age. Plus her policies aren’t nearly as extreme… she isn’t calling for a systemic transformation.

Many of her proposals leave the door open to further compromise down the line — such as the claim that Medicare for All is a good “framework,”.

Against Trump, all the Democratic leaders are actually currently polling pretty well nationally. 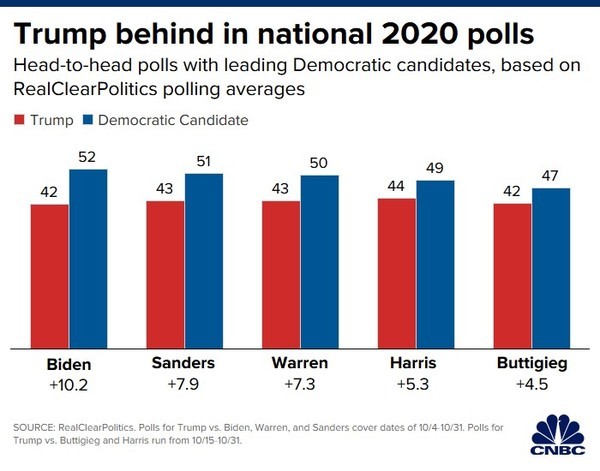 Of course we don’t even know for sure that it will be President Trump that they are running against by the time the election arrives — so these polls might not mean much.  Michael Bloomberg could complicate things further.

Warren is no shoe-in to be sure, but right now I’d say she might be the favorite out anyone (Democrat or Republican).

The impact on natural gas could be even bigger given that shale production is now the majority.

What actually caught my attention more than her drilling moratorium and fracking ban was this report from the Wall Street Journal:

A spokeswoman for the Warren campaign said that motivating investors to move money from the oil-and-gas business is the aim. “We hope they respond accordingly by shifting their investments to zero carbon sources instead of continuing to pollute our planet,” Alexis Krieg said. (1)

That is pretty blunt isn’t it?

She has no bones about blatantly telling the world that she wants to make the oil and gas sector uninvestible.

If we start thinking about what this means for specific companies, I have some initial thoughts…

If fracking gets banned or slowed down the companies that are fracking pure-plays obviously have huge problems.  Their production declines very fast, so no drilling or slower drilling is going to crush cash flows.

That is especially true for those with a high percentage of production from federal lands.

Drilling on federal land occurs mostly in the West, from southeastern New Mexico’s Permian Basin up to North Dakota’s Bakken Shale, as well as in the Gulf of Mexico.

Entire oil-field service companies could become obsolete if she puts a smacking on fracking.

International service companies like Schlumberger would at least have a fighting chance, but for companies operating completely within the U.S. Warren would be a disaster.

The entire sector is going to hurt and would likely need to be avoided.

Pipeline owners would suffer without replenishment, as existing wells decline.

No mystery which pipeline operators either, virtually everything onshore in the United States would be hit.

Warren’s impact to pipeline operators is more than just the impact she would have on production levels — she is also extremely anti-pipeline.

Who Wins If Warren Wins…  WTI and Henry Hub Prices

That is all fracking my friends — see the first chart I showed you in this story.  These wells now represent half of U.S. production and those wells decline very quickly.

Natural gas is the same story, only more.

US brokerage firm Tudor Pickering–a specialized energy boutique — estimates that if fracking were banned, natural-gas prices in the U.S. would jump to somewhere between $9 and $15 and that oil would rise to the $80-to-$85 range and could risk shooting to $150 a barrel during market shocks.

Who Wins If Warren Wins…  Those Who Don’t Frack

The majors would benefit from this.  They have production from shale but it is a small percentage of the pie… her impact on commodity prices would be more important to them.

As the commodity prices go up the majors would reap the cash flow rewards and could shift capital to drilling elsewhere.

Who Wins If Warren Wins…  Those Out Of Warren’s Reach

Canadian producers which are dirt cheap today, international producers, and suddenly offshore (outside of the U.S.) and deepwater gets back in the game.

She could create some pipeline complications for Canadian oil, but the province of Alberta is much better equipped to handle that with curtailments.

Declining U.S. production and soaring oil prices would be great for Canadian producers and service companies.

Warren wants to suck the capital markets out of oil and gas and into renewables.

That will happen if she kills or bogs down the fracking business model.

By bringing the cost of capital down for renewable businesses (cheaper loans, higher valuations on stock) she can accelerate their progress.

Higher oil and gas prices will also provide more tailwind to get the transition to renewables going; their economics are benchmarked against oil and gas.

She is serious about fighting climate change.