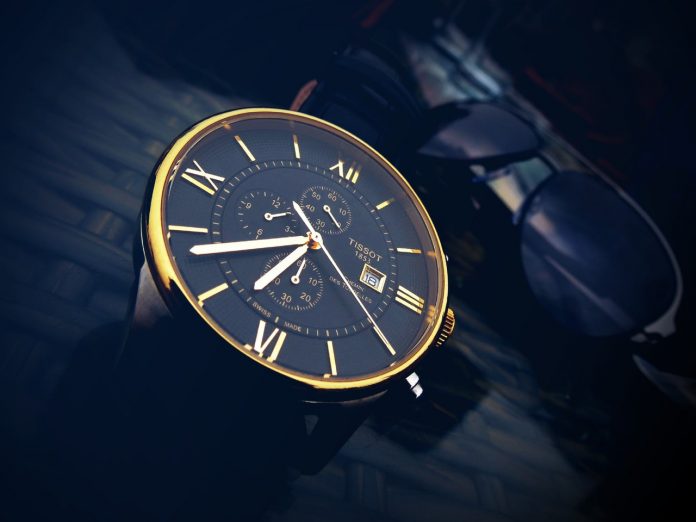 As the calendar turns into a new year, I have FOUR junior mining plays that will come to trade—all of them before the end of Q1 2020.  In fact, one will likely list the week of December 2.

These four stocks alone are going to make my year in 2020.

Gold has had a great 2019.  What I do really well is pick low cost producers that are growing production per share really quickly, and efficiently—just like I do with oil and gas stocks.

I see gold exploration stocks as a great place to make money in 2020—but you have to pick the right ones.

I have FOUR “right-ones” coming to trade with very cheap valuations, proven teams, high potential assets and lots of money in the bank.

These are all FRESH stories—new assets that the Market has not seen before.  And the potential for a quick re-rating with a discovery is very high.

These stocks can make your year too — all of them are all coming out with very low initial valuations, priced as if gold was priced hundreds of dollars below where it is today.

Gold doesn’t need to go up for these stocks to be huge winners from those valuations.

The key here (as always with new cos) is getting onto these stories early BEFORE the market realizes how undervalued these stocks are.  If you act early this is a situation where the retail investor has the distinct advantage.

Each of these companies have management teams that have successfully built juniors before — having generated multi-bagger returns for investors.

So not only do these stocks have dirt-cheap valuations, they also have leadership teams that know how to grow cash flows and earnings.  That is the powerful combination that creates multi-baggers (valuation expansion + growth).

Here are what my fab-four 2020 junior mining plays look like:

Junior Mining Stock #1—is run by the same team as my favorite gold producer, a stock that is already up 400% in 2019.  This team is STRONG right now, and this new pubco has drill results already!  I expect this stock to trade the week of Dec. 2.  Less than 60 million shares out, and only 14 million will be free trading for the first four months.  The tightly held shares of this popular team are going to be in high demand quickly.

Junior Mining Stock #2—has amassed a huge tract of land both adjoining and in the area of one of the most profitable gold mines in the world.  This operating mine is a freak of nature in the sense that normally such high grades and great profitability come in remote places in third world countries.  This mine is in a first world country and is going to be very appealing to institutions adding gold to their portfolios!  Less than 60 million shares out.  It should trade late January.

Junior Mining Stock #3—this team has not only been part of two major discoveries in this area—they are backed some of the most blue-blood royalty in the gold space (…always pay attention to what the smart money is doing!). Their targets are look-alikes for their two other major discoveries—one of which was so rich, it noticeably increased the GDP of its host country when it got into production!  I am expecting a very quick discovery here that would re-rate the stock.  One successful discovery is a game-changer for the stock.  I expect it to come to trade in early March.  It will have an Enterprise Value of CAD$14 million. (Fourteen – so hold onto your hats!)
Junior Mining Stock #4—this team made all their investors a quick double in 2018 when they sold out their discovery in the United States.  That is what company building entrepreneurs do (find, build and then cash out).  Now they are already back, with a new pubco, a stronger seed shareholder group and an easily accessible play that could quickly prove up to be a multi-million ounce resource.   It will come to trade in April with an Enterprise Value of just $9 million — a micro-cap special for opportunistic retail investors.

Premium subscribers were able to participate in either the last, pre-IPO round or the IPO itself.

I’ve been working the junior mining sector for two decades and right now is one of the windows of time that can make a retail investor rich in a hurry—by getting in on the ground floor when good teams come to market. 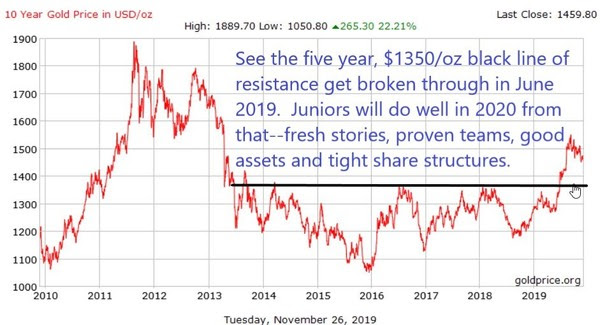 Gold breaking out of five year range was what opened the window.

This is an exciting time but…….these windows are brief – typically 6 – 18 months before going dormant again.  We are now 4 months into this cyclical opening so now is the time to get on for the ride.

Make the most of it!  Get a trial subscription to InvestingWhisperer.com to get the name, symbol and full story on these stocks before they begin to trade.

Then we can sit back and watch the market fight for shares of these tightly held stocks in the first half of 2020!