Spartan Energy–which I think was the best junior oil producer in Canada (i.e. best free cash flow/low cost producer)–sold itself to Vermillion Energy (VET-NYSE/TSX) for 4.5-5x EBITDA.  I think that’s a very low valuation.  It was a paltry 5% premium over the previous day’s close.

This is a huge negative for other junior and intermediate producers in Canada, who only exist because investors think these junior management teams can grow their business and get bought out for 7-10x cash flow.  It makes me wonder why I own ANY Canadian producers if The Best One goes for a paltry 4.5-5x cash flow.

I’m not the only one.  Said Canada’s Scotia Capital on Tuesday morning: “we did not expect such a deal to come so soon or at this low of a valuation (the headline price implies ~4.7x SPE’s ’18E DACF on strip; below our target and at no premium to the current multiples for the peer group). We have spent more time thinking through the deal and talking to investors and are still at a loss.”

But there are many reasons Canadian oil stocks trade at  low valuations–anti-resource governments in the federal government in Ottawa, in the B.C. government in Victoria and even the Alberta government in Edmonton…all campaigned on anti-fossil fuel agendas.  There are big discounts for Canadian oil and gas because it only has one market–the US.  And if you haven’t heard, the US is massively growing its own oil and its own gas production right now.

And the truth is, the only possible buyers for Spartan were Crescent Point (CPG-NYSE/TSX) and Vermillion.  And if Crescent Point did one more deal, they will have a lot more than one small activist on their behind.  CPG would have a broad scale shareholder revolt.  Whitecap (WCP-TSX) would have been a longshot buyer, and southern Saskatchewan is not one of their core areas.

Vermilion was the only Canadian company—and no international company wants anything to do with Canada right now, until the current federal, Alberta and BC governments are all changed—with the cost of capital to do this deal.

So to me, that’s why this deal got done so cheap.  Few buyers, tough market (big discounts for Cdn oil and gas, and even Vermillion could not have raised the money to do this deal in cash right now) and governments not really on the industry’s side.

Scotia did mention the fact that management had more than 10 million performance warrants that expire in December 2018 at $2.40 strike price.  These warrants were created when the company was formed–which was in late 2013, at the height of the last bull market in oil and oil stocks.

These warrants appear regularly in Year End statements–here’s the snapshot from the 2017 Year End financials, and this appears on page 27: 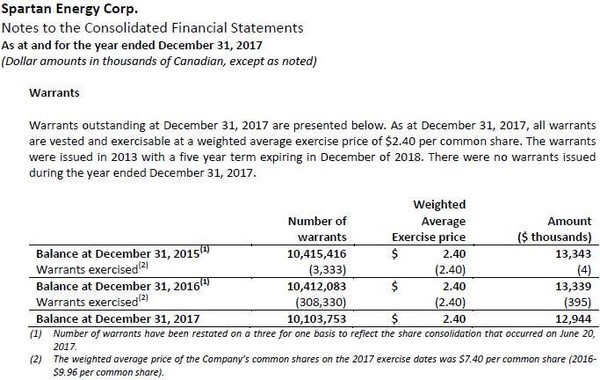 What this shows is management has the right to buy 10.1 million shares at an exercise price of $2.40 (this is presented already taking into account the  3:1 rollback; so they were originally 80 cents) that expire in December 2018; 8 months from now.

Now, only the best teams can extract this from their underwriters, and then only in a crazy bull market like late 20131 was.

At a $6.50/share buyout price, that’s $41 million cash for management OR…at Vermillion’s current dividend of $2.76 annualized, a 15% yield (fifteen percent)–which they would get tax free as there is no capital gains if you take the stock.  The premium on the buyout for shareholders was 5%.

This is the team that also gave themselves a huge block of stock at 15 cents when they did a “recap” on this company when it was called Alexander Resources back in 2013—near  the top of the last bull market in oil.  (After Alexander, every promoter & mgmt team in Calgary was looking to do a “recap”; a recapitalization of a dormant shell company on the TSX Venture exchange for a year–it was the hot new thing to do.)

Don’t get me wrong, I love to see people make money.  This team clearly knows how to make money, and I’ll be following them as close as I can into their next deal.

And this team technically did a great job developing their assets.   In fact, when McHardy et al created that big value vacuum back in late 2013–when they formed the company with all that cheap stock (you really pluck a lot of future value from shareholders when you do that)–they filled that value vacuum quickly.

When they took over  Renegade Petroleum in early 2014, they were able to TRIPLE the IP rates & made themselves good on that big block of cheap stock faster than I thought possible.  So good for them.  Few teams do that, that fast.   Their technical ability was why I owned the stock and followed the company closely.

But this 4.5x EV:EBITDA has to be disappointing to corporate finance people, analysts, brokers and investors. It certainly is disappointing to me.  But it looks like that’s the Market we’re in.

I’m guessing McHardy and his team was thinking about antagonistic governments, low valuations and few (just one?) realistic buyers–despite rising oil prices and cash flows.  The team either now gets a huge payday, or keep the Vermillion stock and collect a fantastic pension now with that dividend…it’s a great dividend, and Vermillion is a great company. Being a much larger entity, with some international production, Vermillion will almost certainly move up faster in price than Spartan would have.

The day after the Spartan buyout, I gave my subscribers 3 new investment reports–all US-listed stocks with US-focused operations.

A low-multiple deal like this might have attracted more attention in the US from shareholders there, but the reality is that Vermillion is a very well run company, with a higher multiple and Spartan shareholders couldn’t ask for a better company to own now.  They just could have asked for a better price.

EDITORS NOTE: My Top US Energy Pick just raised their dividend–again!  This cash cow is rewarding shareholders more and more each year.  Get this Tier 1 Management Team working for you by clicking right HERE.

Next post: Don’t Dip Your Toe In; JUMP Into The Pool