The Northeast – A (Natgas) Growth Story

EDITORS NOTE:  I read A LOT of material each morning, and each week–and I’ve been doing this newsletter long enough now to know The Smart Money in the sector.  East Daley is one of those groups.  They focuse on midstream news (pipelines etc), and even though it’s institutional level detail & insight, it’s written for the common man.  One of their latest stories was so full of great information on the US natural gas market–there is a slew of production increases coming!!!–I asked their permission to reprint it–and they agreed.  To sign up for their free weekly newsletter, email insight@eastdaley.com .  Check them out at www.eastdaley.com

The Northeast: A (Natgas) Growth Story

The Marcellus and Utica Shales, referred to collectively as the Northeast in this analysis, have grown a stunning 6 Bcf/d to 28 Bcf/d in the last year. Much of this growth has been driven through the completion of midstream projects like the Rover pipeline that have helped to de-bottleneck the area.  With Rover, NEXUS, and Atlantic Sunrise nearing completion, there will be plenty of pipeline space out of the Northeast for producers to grow as illustrated in Figure 1. From a strictly historical perspective, the de-bottleneck would make it appear that the Northeast gas market’s persistent basis discounts were over.

However, to truly understand the headwinds facing producers in the area, market participants need to take a step back and observe the entire U.S. gas market.

As apparent in Figure 2, every major basin in the U.S. is forecasted to grow gas production in the coming years. These basins combine for an additional 10 Bcf/d of growth on top of the Northeast’s 7 Bcf/d through 2020. This 17 Bcf/d of growth dwarfs forecasted demand increases of 6.3 Bcf/d, primarily driven by LNG exports. Many of the major basins in the U.S. are oil-driven and the producers there, though somewhat affected by natural gas prices, make drilling decisions based off the oil price. At $60-$70 oil prices, these basins are likely to meet or exceed current forecasts for associated gas production.

Not All Markets Are Created Equal

East Daley’s supply/demand forecast would likely be bearish for gas prices. However, not all markets in the U.S. are created equal. The Southeast-Gulf portion of the U.S., spanning from East Texas to the Atlantic Coast, has remained the premium market and accounts for 5.5 of the 6.3 Bcf/d of demand growth. Getting to this premium market is key for producers to avoid the impending oversupply in the remainder of the U.S. market.

The piece that the de-bottlenecking graph, Figure 1, fails to highlight is the amount of capacity that is open to the Gulf, which at this point and moving into the future, is and will be completely full. To accurately understand where regional markets will price, market participants must account for the supply-demand problem outside of the Southeast box. After accounting for any displacement opportunities, such as gas which previously moved north from the Southeast box, and for new capacity into the Southeast, the Northeast still needs to find a home for 1.3 Bcf/d of gas.

Combined with the Northeast, this ~6 Bcf/d of excess supply will be fighting for demand markets such as Chicago and Michcon, putting severe downward pressure on prices outside of the premium area. 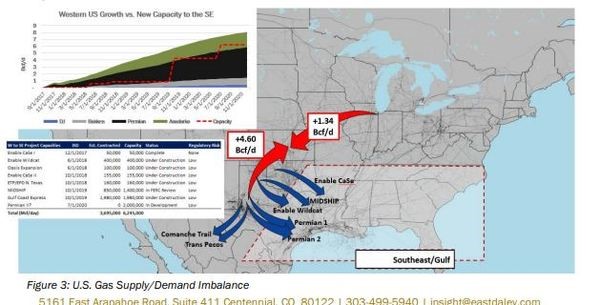 A knee-jerk reaction to the over-supply problem is to say that the Northeast will have to back-down on their growth profile. An area that is completely driven by gas prices should be more affected than any associated gas production. However, when taking a closer look at Northeast producers, a different story based on a unique set of incentives arises.

Due to the years of being constrained, producers were forced to sign up for an unprecedented amount of firm transportation agreements. These “producer push” pipeline projects were necessary to allow a healthy midstream sector to build infrastructure in the area, but now leaves the producers with extremely large take-or-pay contract commitments.

The problem is then compounded when these producers’ downstream commitments and company structures are analyzed. Producers not only supported residue gas takeaway pipelines but also signed MVC’s with processors, fractionators, NGL pipelines, and in many cases, built their own gathering infrastructure. These commitments all combine to paint a picture where Northeast producers are being forced to grow in order to stay ahead of their current and upcoming contract payments and to support other segments of their business.

In addition, they have built their own gathering system and spun-off a separate LP, Antero Midstream (AM), to operate the assets. Antero Midstream has guided to 15%/year distribution growth which will require the producer, Antero Resources, to grow in order to meet this guidance. These relationships are shown combined in Figure 4, which starts to build a strong case as to why Northeast producers, like Antero resources, are highly incentivized to continue to produce and put up a fight in the U.S. market.

This issue does not stop with Antero Resources. Five of the top Northeast producers have signed up for a combined $3.4 billion of residue gas firm transportation alone. Many of them have downstream commitments as well and EQT also has associated gathering systems they must support. The fiveproducers’ residue gas firm transport commitments are illustrated in Figure 5. 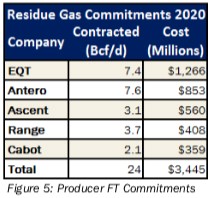 The only piece of the story that can restrict the massive growth in the U.S. is a cross-commodity story. Following all commodities is essential to accurately forecast growth and understand market risk. In the Northeast, the story does not end at the gas:  it ends in the NGL market.

And, in the Permian, the story surrounds crude oil as a risk to gas growth.

Mariner East 2 (ME2), a 270 Mbbl/d NGL pipeline that has been planned by ETP (formerly Sunoco) is the key piece needed to increase production in the Northeast. Many of the largest growing producers in the Northeast have some, or all, of their production in wet areas of the Marcellus/Utica. Shown in Figure 6, ME2 is the takeaway pipeline for many of the fractionators in the area.

Without it, most of the NGLs are being railed/trucked away, but even these transportation methods are reaching critical throughput levels and cannot sustain the continued growth. Originally estimated to be in service in 2016, the ME2 pipeline has experienced regulatory hurdles that have prevented its completion. Once completed, it will be able to support 6.7 Bcf/d of associated wet gas growth allowing producers in wet areas to continue their aggressive growth profiles. 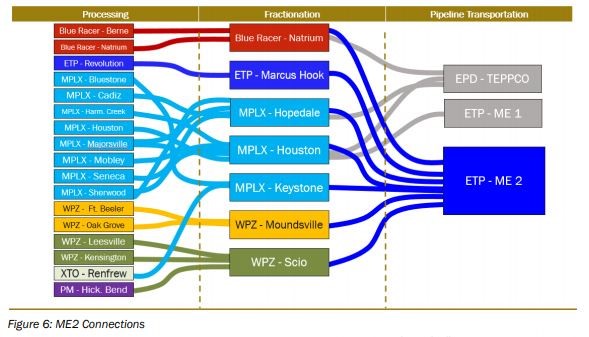 In the Permian, the only thing holding production back at current oil prices is the lack of crude oil takeaway. Though some crude can be taken away via truck and rail, the Permian is reaching a critical mass of volume where production will need to be curtailed. This curtailment could slow the growth of associated gas in the area until late-2019, which would help the oversupply outside of the premium market. 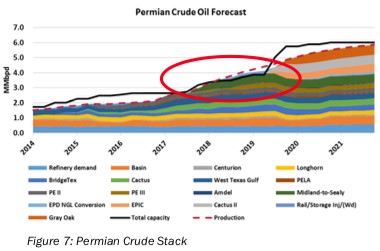 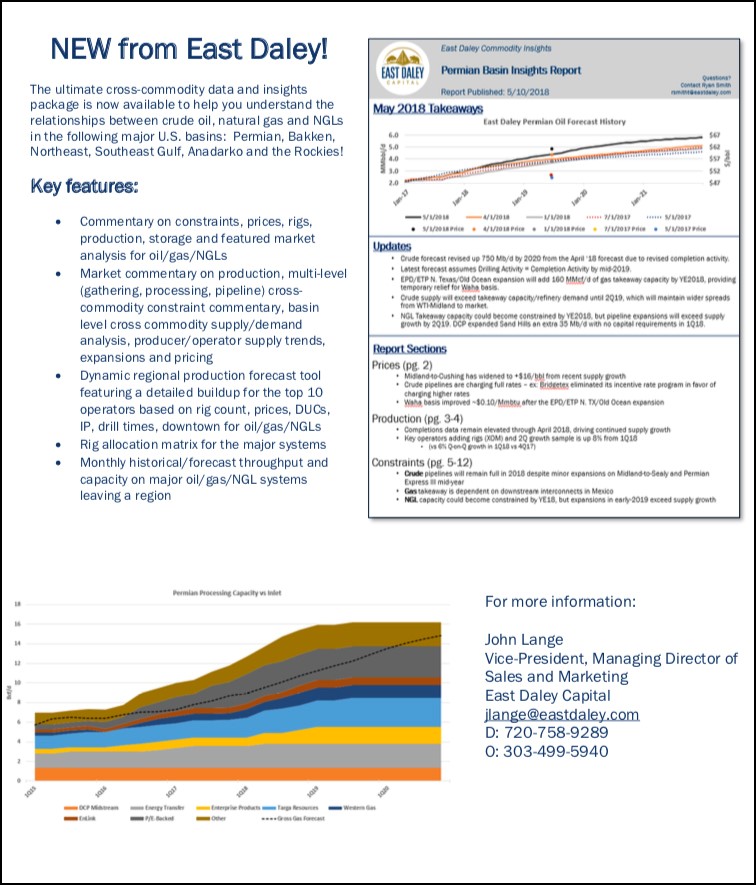 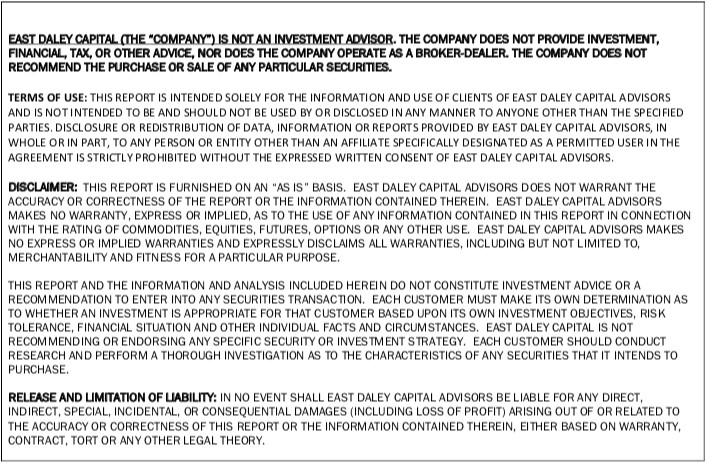 Remember to email them to get on their free list– insight@eastdaley.com

Next post: These US Energy Stocks Could Move on July 6