North America is finding more oil than it can pipe or ship. Investors and the general public alike now know the story about pipeline constraints; it’s in our newspapers every day.  Right now, the Permian formation in west Texas has it, and Western Canada has it.  The Bakken play in North Dakota had it in 2012.  (And the Marcellus natgas formation in Pennsylvania has had it for almost 10 years!)

There’s a unique solution–or at least a partial solution–to Canada’s problem, and that is: upgrading Canadian heavy oil.

Below, I’ll introduce you to three innovative minds who are working on this problem.  But first, let me give you the set-up on why this is needed:

That oil has got to get out of the country and if its not going by pipeline, it must go by rail.

It’s the story of two options.  Which is true for now.  But partial upgrading of Canadian heavy oil would be a third way, and it’s gaining some traction.

The Role of Diluent

Pipelines ship about 2 million bbl/d of bitumen to the south.  But the pipeline capacity needed to ship those volumes is closer to 2.6 million bbl/d.

Why so much more?  Because bitumen does not flow on its own.  To get bitumen to flow you must mix it with lighter oil, called diluent. (Easy to remember as it sounds like ‘diluted’ which is what diluent does.)  About half of the diluent used is ‘condensate’ from western Canadian natgas producers (it’s the only product they’re getting any real cash flow from.)

It takes a mix of roughly 30% diluent / 70% bitumen to get bitumen to flow in a pipeline.

Adding the diluent serves no purpose apart from getting the bitumen moving.  In fact, it’s a nuisance for on the other end.  The refiner has to strip it out and in some cases send it right back up a pipeline to Western Canada!

Reducing diluent requirements would free up pipeline capacity.  While not a saviour to the industry, it is incremental capacity that would ease the transportation crunch.

Western Canada actually imports diluent just so it can export it back out.

Below are Canadian brokerage firm RBC’s estimates of the blending requirements of bitumen.  Roughly 600,000 bbl/d of diluent were blended in 2017.  This will increase to 675,000 bbl/d by 2021 as oil sands production grows. 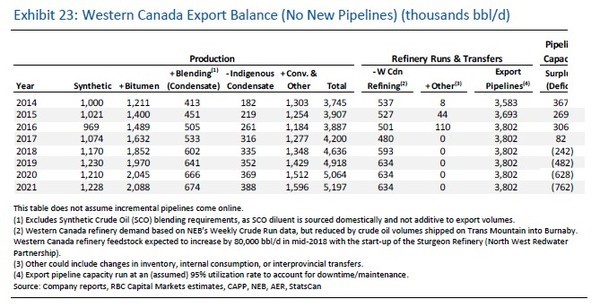 Considering that the shortfall in capacity is about 750,000 bbl/d by 2021, in theory, if you could get rid of all the diluent requirements you’d be nearly balanced.

Its not quite that simple however.  “Indigenous” condensate (condensate produced in Alberta), amounted to over 300,000 bbl/d in 2017.

Even if you removed the need for diluent, you’d still need pipelines to move that condensate to market.

Condensate producers would also be seeing a much lower price.

But reducing the reliance on imported diluent would still free up 220,000 bbl/d of pipeline capacity, which is a worthy goal.

Diluent is an added cost to producers.  They pay a premium for diluent in Alberta and then are forced to sell it at a discount when its removed at the refinery.

The net cost of adding diluent is between $6-$8 per barrel for the oil.  On top of that its another $7 per barrel in transportation costs, fees and levies.

So how do you reduce the reliance on diluent?  You need to upgrade the oil in Western Canada.

But full upgrading of bitumen is costly.  The recently built Sturgeon upgrader/refinery came in at over $9 billion.  Before it was cancelled Suncor’s Voyageur upgrader was slated at $21 billion!

The Alberta government, recognizing the logjam of oil, in February announced a $1-billion loan guarantee and grant program for companies willing to set up partial-upgrading facilities in the province.

Older Partial-Upgrading Process Was Too Expensive

Traditionally even partial upgrading has been too expensive.

The legacy process employs delayed coking.  This is a step in most refineries but can be used as a stand-alone process to “lighten” up the bitumen.

But a stand-alone delayed coking facility costs $60,000 per bopd (barrels of oil per day) or more.

In comparison to Sturgeon (which came in at $185,000 per bopd), or Voyageur ($85,000-$110,000 per bopd depending on the source), its favorable.  But not enough to justify building one, especially since what comes out is a lower quality oil.

Delayed coking is expensive is because it upgrades the bitumen too much.  The product is better than pipeline specs.

Others have been trying to modify the process to bring down costs.

Meg Energy (MEG-TSX) was one of the first.  They came up with better product called HI-Q (less naphtha and residuals, more gasoil and diesel) but it still wasn’t cheap enough.  Capital costs were $30,000 per bbl/d.

The company hasn’t said much about HI-Q in the last couple of years.

But while Meg seems to have stepped back, others are still forging ahead.

There are more companies than I have room to talk about.   I’m going to mention three.

Fractal Systems is a private company.  They are farthest ahead with their JetShear technology.

The JetShear process heats the bitumen and brings it to a high pressure before pumping it through a proprietary nozzle.

The result is a 19° API oil with far lower viscosity, with the added benefits of lower acid and sulphur content.

The process doesn’t quite get the bitumen to spec, but it reduces diluent requirements by 42% to 60%.

A few years back Fractal landed a big oil sands player to test the technology in Cenovus (CVE-NYSE/TSX).
Since 2014 they have operated a 1,000-bopd pilot plant near Provost Alberta.  In February Fractal announced that the process was ready for commercial production.

FluidOil is another small private company, though it’s trying to go public via Dawson Gold (DYU-TSXv).   Their technology is called Viscositor Heay-to-light (VHTL), which is a combination of their proprietary Viscositor technology and the Heavy-To-Light (HTL) they acquired with the energy assets of Robert Friedland’s Ivanhoe Energy.

VHTL is probably the closest to traditional upgrading in that it relies on a high temperature cracking and basic hydrogenation with no particular catalysts.

What makes VHTL unique is its scale.  Its intended to be implemented at the well site where heat from coking can be recycled into steam and reduce natural gas requirements.

The VHTL process produces 21° API oil though the company says this can be raised to 29° API oil.  It also removes some sulphur from the fluid.  No diluent is required.

FluidOil has a relationship with a major Canadian oil sands producer (there is no other kind anymore! Everybody else has left!) to move the process forward.  They are also working with Pemex on a project upgrading Mexican heavy crude.

Sherritt (S-TSX) is a nickel miner, which makes it an unlikely participant in the race for better upgrading technologies.

However Sherritt’s history also includes a foray into coal gasification.  That combined with the re-use of their nickel smelting pressure chambers (called autoclaves) have created a unique method of upgrading.

The process combines bitumen with hydrogen and another proprietary catalyst within the autoclave.  The pressure, hydrogen and catalyst do the work of lightening up the bitumen.

The bitumen is refined to 24° API.  This is above pipeline specs, so they dilute the oil further with raw bitumen.

The process is really early stage.  But Sherritt appears serious about moving forward. The company made it a key presentation in their recent Analyst Day.

Sherritt says their process is the lowest on the cost curve, as you will see in their chart below.

Capital Costs Of The New Technologies

Like I said it’s all about capital. With each process costs are coming down, at least on paper.

FluidOil says its capital costs for a 30,000 bopd VHTL unit would be in the range of $7,500-$10,000 per bopd (barrel of oil per day). If this process was used in a lower cost country, management says the cost would be 40% less.  This capital cost will reduce even further if only pipeline spec quality (lower than 29 degree API, or just to Syncrude quality) is required.

Fractal Systems says their JetShear capital costs are around $6,000 per bopd.  This is even lower, but some diluent is still required.

Sherritt has been more tight lipped about capital costs.  What they do provide (see chart below) is a breakeven WCS price comparison.  It suggests they can come in with costs below all the competitors. (I inserted where FluidOil says they would come in.)

I’m not sure how much stock to put in this comparison (pardon the pun), as their process appears to need huge scale to get costs that low–so on a per barrel basis it might be cheap, but the sheer size required says their process would need a HUGE upfront capex number. 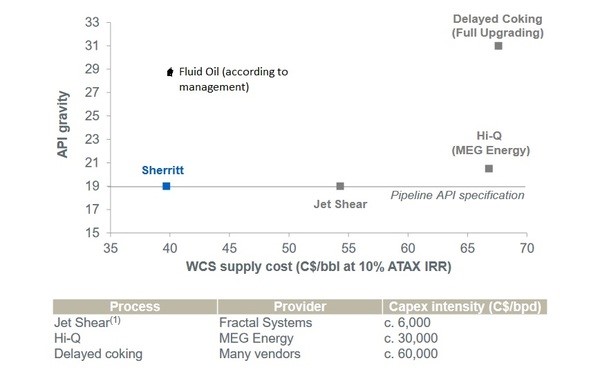 Partial upgrading isn’t going to change the need for more pipeline capacity.  But it can lessen it and allow more money to stay in Western Canada.

These technologies are still in the early stages.  The opportunity exists to squeeze more costs out and create a better product.

But there are also still questions about product quality and equipment life cycles.

What we do know is with the upcoming logjam of heavy oil there is room for new ideas.

Apart from Sherritt, there is no public company that allows you to play the sector.  But I’ll be following the developments closely and be on the look out for announcements of commercial facilities being developed.

EDITORS NOTE: One of the most important factors in buying oil stocks is…how much stock does management own?  Are they fully aligned with shareholders?  The Chairman of my most recent stock pick put more than $35 million of his own hard cash into his company: that’s commitment.  I think he’ll make (an even bigger) fortune, because I really like his play and his strategy.  Join the multi-millionaire Chairman and me and get the name and stock symbol of my latest pick by clicking HERE.