The Biggest Bull Market in Energy is VOLATILITY

As a full time energy investor, I can tell you The Big Oil Stories of 2018 have been:

When it comes to volatility, let me show you how quickly the dominant meme in energy can change.

On Otober 22, US brokerage firm Raymond James (RayJay) held a big conference call to say both those stories will go away, and quickly, with oil prices and stocks about to take a huge upward move.

October 22 is a lifetime ago in oil news.

They made huge upward revisions to their oil price forecast through 2020.  On top of that, RayJay believes that shares of oil companies are cheap relative to $70 WTI having badly trailed the oil price recovery that started last summer.

They think oil prices are going up and the oil sector is going up more!

First let me tell you the specific new oil price targets that Raymond James has laid out for both WTI and Brent crude.

These are BIG upward revisions.

I’ll focus in on Q1 2020 because that’s where the firm sees oil prices peaking – though they do see prices staying strong well beyond that as well.

You usually see big revisions like this after the price has moved.  Today we are under $70 and the recent momentum is negative… so this is a bold call.

For Brent crude the increase is even bigger.  The firm sees Brent at $105 per barrel in Q1 2020 which is up from the previous target of $80 per barrel.

These are obviously big revisions – almost 30% increase for both types of crude.

If this really does happen, revenue jumps 30% but cash flow almost doubles for a lot of producers.  This has obvious – and positive! – implications for oil stocks. So that is their view on oil.

More important to us is why it is the Raymond James view?

Does it make any sense?

Here Are The Reasons Why….

Before I get into this I want to make sure that you don’t get too focused on just the Q1 2020 date.  RayJay made sure to note that they don’t believe that high oil prices will just be a temporary thing.

Their bottom line opinion is that we should get ready for a steady dose of triple digit oil prices.

What changed?  Why did Raymond James bump their oil price targets by almost 30%?

The answer is increasing clarity on Three Big Issues – one of which they think the Market is ignoring to a great degree.

Let’s take a look at them.

The fact that Venezuelan oil production is a hot mess isn’t news.  Just how bad that mess has truly become is what is surprising.

The reality has been much worse.

The most recent data here shows that production is already massively under the original 2019 target.  The production shortfall is much larger than expected and has happened much faster. 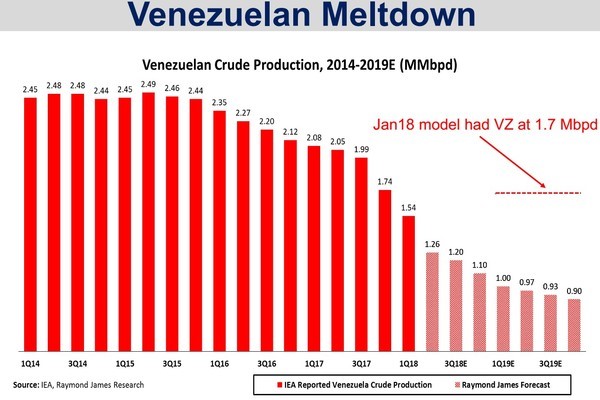 Half of the 2.5 million barrels per day of production (bopd) that the world had gotten used to having from Venezuela in 2015 and before is gone – and conditions in the country are getting worse not better.

With Nicholas Maduro’s election victory (if that’s what we are meant to call it) in May there is no realistic hope of reversing the fortunes of the oil industry unless there is an immediate coup and subsequent logic defying change of fortune.

The second reason for RayJay making such a big upward revision to oil price expectations is Iran.

The impact of sanctions is happening faster and is far greater than what was originally expected.

Originally RayJay expected sanctions to take a 200,000 barrel per day bite out of Iranian exports starting in 2019.

Instead the sanctions have already caused a huge reduction of Iranian exports and it has happened months earlier than expected.

Raymond James refers to recent data that suggests that Iranian exports in October are going to average a whopping 1 million barrels less than early 2018 levels.

And that is before sanctions have even started!

As a result Raymond James has lowered their expected 2019 Iranian exports by 500,000 barrels per day from their original forecast.

Which is exactly what Raymond James warns of in their report!

Be aware that since then, the US government has given exemptions to several countries to specifically help keep the price of oil low (especially before Tuesday’s US mid-term elections!)

In 2020 (that is just 14 months from now… terrifying I know!) there are new rules coming into play for the global shipping market.  That may not sound interesting but trust me it is.

Those new rules are intended to reduce the amount of pollution produced by the world’s ships.

These rules were created by the International Maritime Organization (IMO). Starting in 2020 the IMO is going to enforce a complete ban on ships that use fuel that contains a sulfur content higher than 0.5 percent.  The current standard is 3.5 percent.

A ship in violation will be hit with fines, almost certainly find that their insurance become invalid and likely declared “unseaworthy” which would result in the ship being barred from sailing.

In other words, this rules are going to be complied with.  There really is no option.

The impact for the global oil market is that it makes high sulfur oil that is currently being undesirable.  In total Raymond James believes that IMO 2020 will “effectively” remove 1.5 million barrels of currently consumable oil supply.

Admittedly there is a lot of “guesstimation” involved here, but Raymond James thinking to get to that 1.5 million barrels being washed out is this:

It will be like a David Copperfield magic trick that makes 1.5 million barrels per day of production disappear – and it could happen overnight.

While this issue is still pretty much off-the-radar it will be a game-changer for global oil prices in 2020.

Again, the US government is trying to come to the rescue of oil consumers by asking the IMO 2020 group to ‘phase-in’ their targets to ensure that oil markets are not disrupted.

Global oil inventory levels have drawn down by 370,000 barrels per day in 2018; RayJay sees this continuing.

If accurate that is going to create a big inventory draw and that assumes $100 Brent in 2020.  If oil prices are lower the draw will be bigger.

They key number that the market will be focusing on is the number of days of oil consumption in storage.  A normal number is 30 days (the historic long term average).  We are already under that at 28 days as of Q3 2018.

The chart below shows how closely WTI follows inversely with the number of days of oil consumption in storage. 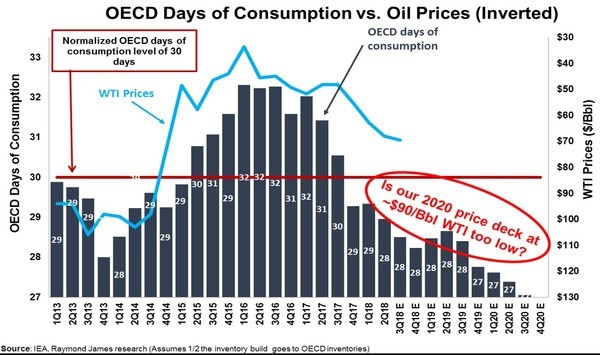 When looking at the chart you could make a compelling case that oil prices should already be much higher than they are.

With their expected draws Raymond James current view has oil consumption in storage getting down to 27 days in 2020… a concerningly low level.

In fact that 27-day figure makes the firm wonder if they actually aren’t lowballing how high oil could go even with their $100 oil in 2020 call.

But what has happened since then? Just:

1. the single largest reported increase in US production in history
2. the US gov’t gave exemptions on Iranian sanctions
3. Libya and Nigeria have surprisingly increased production
And now the dominant meme for investors is global cyclical slowdown, and investors appear to be more worried about $50 oil than $100.

PS:  I watched RayJay call for a collapse in oil prices starting in late 2012, with very well researched data.  They were early, but they were right, and they were right for the very reasons they outlined at the time.  Time will tell.

WHAT WILL ENERGY STOCKS DO IN 2019?  Come hear Nathan Weiss, editor/owner of Unit Economics, in Calgary’s Hyatt Hotel on Monday November 19 as he outlines his case for energy stocks. You will also hear from some of the top junior producers in the Americas, with assets in Colombia, the Permian, and of course Canada.  This exclusive event has only a few seats remaining.  You can sign up here.

Previous post: My Greatest Winner of All Time Will NOT Be an Oil or Gas Stock