This is What Happens if Producers Only Spend Cash Flow (Hint: Bullish)

How quickly could US shale production grow again if the oil price keeps rising?

I suggest there has been a fundamental change—a bullish change—that will prevent US oil production from rising quickly. It certainly won’t grow as fast as it did from 2010-2015.
That’s because

If producers can’t use external debt or equity to grow; if they can’t use any money to drill a well except their own internally generated cash flow—then they may not be able to grow at all.

The numbers show growth was only possible by massively outspending cash flow—and going forward access to all of that easy money is gone.

The Bakken is the Granddaddy of the shale oil plays.  The companies operating here have had a decade to perfect their techniques and turn shale production into something of value for shareholders.

I spent some time going through all of the 10-k (annual financial) filings for Continental Resources (NYSE:CLR), Whiting Petroleum (NYSE:WLL) and Oasis Petroleum (NYSE:OAS).

I’ve laid out my findings below because I haven’t ever seen it recapped in this manner for investors to see.

The graph for each company represents how much capital spending for each company exceeded cash generated from operations for the period 2010-2015. The table that follow each graph lays out the data. 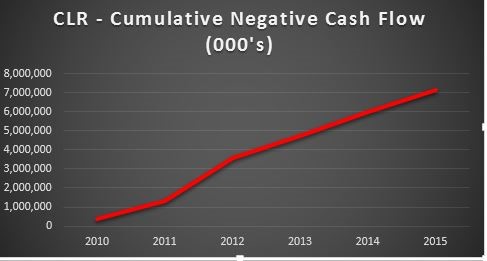 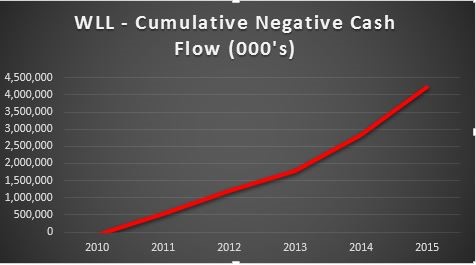 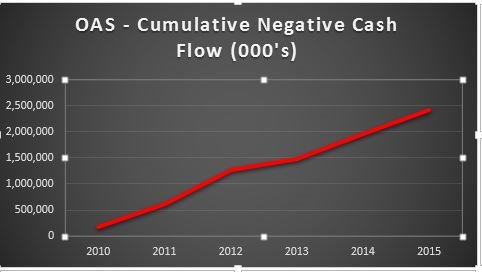 From 2010 through 2015 these three companies have outspent cash flow by a combined $13.8 billion.

Combined cash flow from operations for these companies was $21.6 billion and total capital spending was $35.4 billion.  They outspent cash flow by a companied 163%.

The incredible thing is that I excluded cash spent on acquisitions from those spending numbers.  With that included the cash outflow was even larger.

Hey, give me $13 billion dollars and I bet I can make some oil come out of the ground too!

But What About All Of That Production Growth….

The justification for outspending cash flow by billions and billions of dollars is that the production growth it generated was worth it.

But was it really?

The slide below is from Continental’s most recent corporate presentation.  In this slide the company brags about having the industry leading recycle ratio.

A recycle ratio is the cash flow from producing a barrel of oil (equivalent) divided by the cost of getting that barrel out of the ground.  If that ratio is 1.0 it means that the production is breaking even.  If it is below 1.0 the companies are losing money. 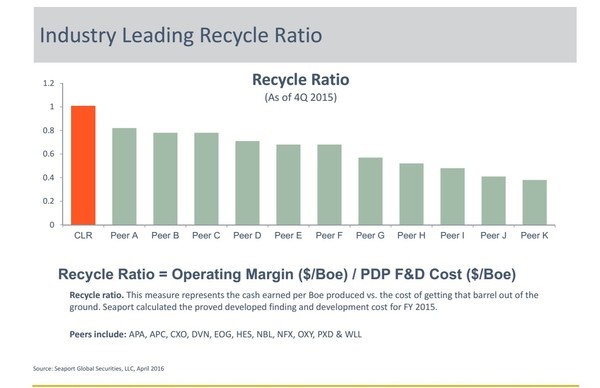 In the 1980s a Canadian golfer named Dan Halldorson was told that he was Canada’s greatest golfer.  To which Halldorson—who has since passed away—replied  (very politically incorrectly) “isn’t that kind of like being the tallest midget?”.

My point is that a recycle ratio of 1 isn’t something to brag about.  It is a depressing number.  According to the slide, the rest of its competitors are even worse.

And the financial performance is actually worse than the recycle ratio alone would make it seem.  The recycle ratio does not factor in the interest expense that these companies incur on their debt or the general and administrative expense of running their companies or any taxes they pay.

In 2015—says Continental with this recycle ratio slide—all of these shale producers were losing money producing oil including Continental.

Imagine, all of those billions and billions of dollars borrowed and raised through equity issuances to grow production as fast as possible—to then lose money producing those barrels.

Consider some basic math if these companies had to live within cash flow. That would have meant $13.8 billion less spent drilling wells.

If just three companies spent within cash flow, US peak oil production would have been roughly 422,400 bopd lower.  That is a stunning figure. And I think it’s very very bullish.

It’s also very simplistic and possibly not very accurate, but you get my point.  The production growth from shale would have been a fraction of what it was if these companies hadn’t had access to easy money and foolishly generous capital markets.

Investor sentiment today isn’t going to allow these companies to increase their debt quickly if at all.  That means the oil price will have to rise a lot, with service costs staying at these low levels, for US production to increase.  This industry is now going to be forced to figure out how to become a lot more profitable.

Next post: How To Profit from Brexit Now [2016's Greatest Buy Opportunity]

Previous post: How to Invest in Energy–for the Long Term

Recycle Ratio
A measure of a company's production efficiency based on its finding and development costs. Equation: Profit from each barrel produced / cost of finding the barrel of oil