Sell Your Oil Stocks. Here’s What I’m Buying. And Here’s Why.

It means US oil production will not follow anywhere close to the same trajectory the rig count has (i.e. falling off a cliff), and it also means the number of rigs needed to simply sustain US production here at 9.5 million bopd is much lower than the Market currently believes.

Look at these two EIA charts—the first shows rig productivity in the Bakken (which is almost all in North Dakota) over the last eight year overlaid against the rig count in the Bakken.  The second one shows the same  for the Permian—which is located in west Texas.  The charts are from the EIA’s Monthly Drilling Productivity Report.  They show the same thing happening, but the Bakken chart is a bit more stark.

Look at the left hand side of the Bakken chart, back in 2008-2009.  During the Financial Collapse, rig countspredictably fell.  Production per rig unpredictably shot up over 50% during the same time—from 200 bopd (barrels of oil per day) to just over 300 bopd.  Then as the rig count rose over the next four years, productivity per rig didn’t hit the 2009 peak until 2013.  (That’s a very important sentence, read it again–rig productivity DECLINED for two years as the number of rigs INCREASED). 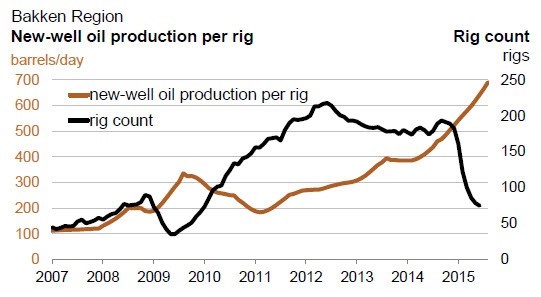 Move to the right on the Bakken chart—to last year/this year.  This year as the rig count collapsed again, rig productivity soared in the Bakken.

The Permian chart below is showing the same effect back in 2008-09, just more muted as there were few horizontals in the Permian then.  But in 2014-15, the chart shows the same dramatic increase in productivity. 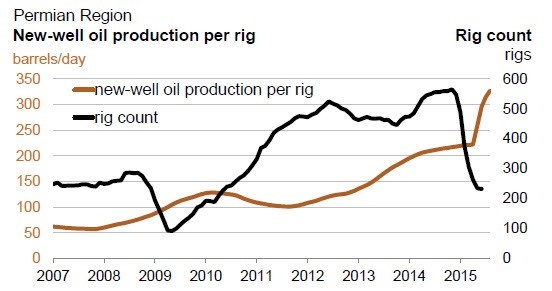 It certainly looks like productivity jumps 50% as the rig count drops 50%.

That’a stunning statistic, and it’s surprising to me that it’s not being discussed in the Market right now.  To me it doesn’t seem to be part of the equation in determining oil prices.  And these charts and my conclusions are quite bearish for oil.
There’s one other important point about these charts—to me, these charts separate productivity increases from the drop in rig counts from the productivity increase that comes from better fracking techniques.  The industry consistently increased productivity per rig throughout the Shale Revolution, but the impact of fewer drills overshadowed those productivity gains in the Bakken for almost two years—productivity bottomed in 2011—and it took another two years—not until 2013—for productivity to hit new all time highs.
I’m an investor first.  All I really want to know after reading this is…how do I make money from this information?  The answer is really quite simple.  And it helps explain why my two largest positions this year are actually in the black (that means up ;-)) as the rest of the energy market is down severely.

Learn how to profit from this information and make money this year in energy while your peers don’t—click here.

Next post: This Trade is So Simple Your Grandma Would Get It