Since oil really started crashing, the media can only talk negatively about oil.

These are the same talking heads who had no clue about the impending 50% plunge in prices. Why do we listen to them—instead of paying attention to facts?

Here is one fact….US gasoline and oil demand is surging.

That may surprise you, but it’s happening—and in a bigger way than anybody expected.

The reason that you haven’t heard about it? The media isn’t going to write headlines on surging US gasoline demand while oil prices are trading under $50 per barrel.

Writers are looking for stories focused on how far oil is going to fall. If the word “glut” can’t go in the title—forget it. Fear sells more than greed.

The weekly EIA release showed gasoline demand in the United States up a staggering 800,000 barrels per day higher than the same week last year. That continues a recent steady string of big Year-on-Year (YoY) increases.

Gasoline demand in the United Stated over each of the past four weeks is up on average over the prior year by 725,000 barrels per day. 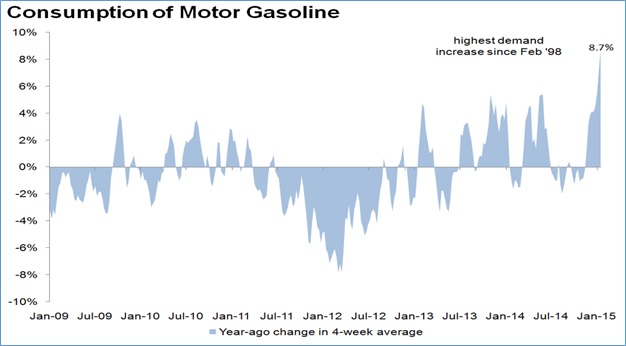 Don’t trust me; go directly to the EIA website yourself .  The numbers are easy to see.

Contrast this 917,000 barrel per day demand against the oil oversupply “glut” that is guesstimated at 1-1.5 million barrels per day.

If this is not a short blip up in US oil demand, this by itself goes a very long way to balancing the oil market.  And remember, this demand response excludes any similar demand response that might be happening globally.

Meanwhile, the rest of the world consumes a much larger 73 million barrels per day of oil.

Isn’t it possible that oil consumption in the rest of the world would also go up as the result of a 50% drop in prices?  Probably—but high quality, recent stats are hard to find.

The rising US dollar (10-15%) means the 50% drop in oil prices isn’t quite as large in the rest of the world.  But all countries are getting a pretty big drop in oil and gasoline prices relative to recent years.

What Does History Tell Us?

This initial demand response has been much stronger than expected—but can it last?

The 2008 oil price crash saw demand crash on the back of the housing bubble induced financial crisis.  There is no crash in demand now.  This is a supply induced oil price decline.  The most similar oil price crash therefore occurred in 1986.

In September of 1985, tired of losing market share Saudi Arabia decided to increase production.  Oil prices fell 50% over the next few months.  By the second quarter of 1986 the demand response was evident.

Today we have a larger global demand base of 92 million barrels per day, so a similar percentage increase in demand would equate to a 3.1 million barrel per day response.

Again that is more than enough to eliminate the perceived 1 to 1.5 million barrel per day oversupply situation.

Now I want to be clear here, I’m not saying that I know that the global oil demand response to these much lower prices is going to be 3 million barrels per day.

What I am saying is:

There is a case to be made, that the demand response alone may have already eliminated the oversupply situation.  We won’t know that until a few months from now when all of the available data is available.

Demand Is Increasing, What About Supply?

There is of course a second force to consider in addition to demand–that being supply.  After all it was surging US shale production growth that caused the current oversupply situation in the first place.

There is one chart that sums up what has been happening with global oil supply over the past several years.
Here it is. 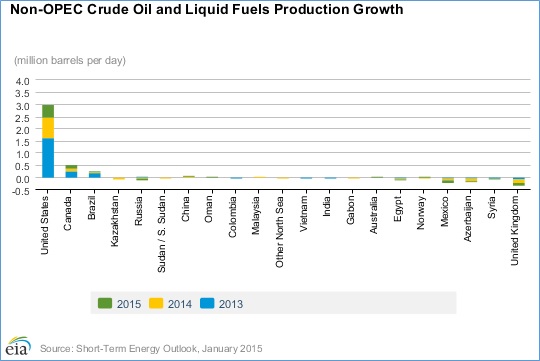 Global oil demand has been growing at a rate of about 1 million barrels per day every year.

OPEC production has been basically flat. There are more than a few people who don’t think there is any spare capacity inside OPEC available to grow production.

That means that it has been up to Non-OPEC countries to provide the increase in supply needed to offset global demand growth.

As you can see from the chart above, all of that supply growth has come from the United States, with an assist to Canada and a small pat on the back to Brazil.

And do you know where every bit of that American oil production growth has come from?

Shale. It has saved the world from an oil price spike in recent years. It is the only option for keeping production at a high enough level to supply the world’s thirst for oil.

Do you know what $50 oil does to shale production? It puts a BIG dent in it.

Not all at once, but it has already had an immediate impact on drilling permits and drill rigs.

And with shale’s high early year decline rates, a drop in drilling is going to show up in production very quickly.

Now Is The Time To Start Preparing For The Rebound

It is hard to see the light at the end of the tunnel when oil continues to struggle to maintain $50 per barrel and the media fills the headlines with gloom.

But early indications are that the demand response to lower oil prices is strong–shockingly strong.

On top of that the huge decline in rig counts has laid the seeds for a significant slowdown in US production.

We have had oil crashes before, but we haven’t had one where five million barrels per day of production come from a source like shale that has extremely high decline rates.

When demand is up by almost one million barrels a day, the supply response doesn’t have to be near as big to bring the oil market back into balance.

The media is telling us one thing, but the facts are telling us another.

The facts–and the stock charts–are telling us that now is the time to be looking at oil stocks, even if it looks like oil itself is going lower.  The good news is that you don’t need to stray from the very best companies—these are the stocks that respond first, and respond sharply.

I’ve already identified the three best oil producers to buy in order to play a rebound in oil prices.  In fact, I just bought all three yesterday.

These three companies have proven top management teams, low cost oil production and pristine balance sheets.  They aren’t just poised to survive the oil crash, they are going to benefit from it as they are able to pick up distressed assets on the cheap.

I’ve got a full report available on all three of these companies and it is ready for you.  Here is how you get it…..click here.