Despite oil being up today, it’s ugly for E&P companies across the globe.  But I think Canadian producers have been hit with Murphy’s Law worse than anyone.

After a decent Q2–because of the low Canadian dollar and forest fires reducing supply–virtually everything that possibly could go wrong, has gone wrong.  Look at this list:

Oil, natural gas, propane……it doesn’t matter which product a Canadian operator is producing today because they all have virtually the same thing in common.

Pricing stinks.  Propane prices in Canada have been negative for weeks.  Yes, that means producers have to pay to have it taken out of their gas stream.  One of the smaller natural gas hubs in Canada has had negative pricing–as much as $2.50/mcf!!–for a couple weeks.

For a while companies were able to avoid the challenging natural gas price environment by focusing on producing oil and liquids rich gas.  Encana (ECA) for example had rolled out a strategic plan to shift its production base from a heavy gas weighting to a more profitable liquids focus.

Now it doesn’t matter.   Drilling for oil or liquids in a shale play today is just as futile as drilling for natural gas.
At these commodity prices the model is broken.

Canadian heavy oil prices (Western Canadian Select) are now sitting at $25 per barrel.  Twenty-five. That is not a misprint, that’s the bleak current reality.  As I wrote last week, the cause is the simultaneous start-up of phase 2 of Imperial Oil’s (IMO-TSX/NYSE) 110,000 barrel per day Kearl Project, and 230,000 barrels of production coming back online that had been shut in from forest fires.

The bad news is coming from so many directions it makes a person’s head spin.  Canadian producers are even being impacted by things that are occurring not just south of Canada’s border, but south of the southern U.S. border.

In an effort to remove some its light oil glut, the U.S. has granted approval for a swap of up to 100,000 barrels per day of U.S. light oil for a similar amount of Mexican heavy.  The almost-certain loser in that trade is Canada, where 100,000 barrels of Canadian heavy oil will likely be displaced.

A little closer to home BP’s 413,000 barrel per day Whiting Refinery has had almost 240,000 of that capacity shut-down after a malfunction.  That leaves another 240,000 barrels of Canadian production stranded and making matters worse no one knows when the problem might be rectified.

Murphy’s Law #5 – Not One, but TWO Pipeline Closures

Incredibly there is more, as not one but two major Canadian pipelines were recently closed for different reasons.  The Enbridge (ENB-NYSE/TSX) Spearhead pipeline was closed due to a leak and the Alliance Pipeline was closed because sour gas had contaminated it.

The pipeline and refinery issues will be resolved with time–but some of these problems are permanent.  Count the reversal of the Rockies Express (REX) pipeline as permanent.

Soaring natgas production from the US northeast–the massive Marcellus formation and the Utica directly underneath–has made Kinder Morgan decide to reverse part of its $5 billion REX pipeline.  Instead of shipping gas from Wyoming to Ohio and farther, it now sends Marcellus natgas–which has the lowest cost in all of North America–into the Midwest, which is one of Western Canada’s biggest remaining markets. At some point, this reversal has the potential to displace 1 billion cubic feet per day of Canadian natural gas that used to be sent eastward (but that’s not happening yet). 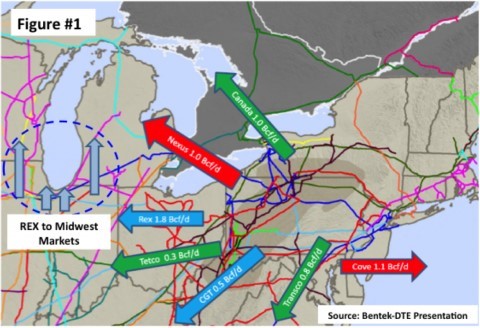 Even the weather is getting in on the act of kicking the Canadian E&P sector when it is down.  El Nino is a weather pattern caused by warmer than normal ocean temperatures in the eastern Pacific.  Generally that brings a lot of stormy weather to California, and mild winters to the rest of North America.

This winter is expected to be the biggest El Nino since 1997-98.  Now, California does need rain badly.  But Canadian gas exports to California have soared to help make up for the loss of hydro-electric power.  El Nino will likely mean reduced exports, just as Canadian natgas production rises for the first time in five years.

And everybody understands that a mild winter across the eastern two-thirds of North America will mean dramatically less natgas usage for heating.  Each of the last two Februarys have been record cold months that saved natgas prices from falling well below $2/mcf later in the year.

After 44 years in power, the ruling Progressive Conservative Party of Alberta finally lost a provincial election earlier this year.  They were a centre-right party.  The newly elected New Democratic Party (NDP) is politically positioned considerably to the left. Climate change is a big issue for them, and the oilsands–the bulwark of the provincial economy–is obviously vulnerable to new legislation.

The NDP’s first move was to hike corporate income taxes.  They are also committed to a royalty review, with the new Premier Rachel Notley saying “When times get tough, those who are profitable should be paying just a little bit more.”  READ: higher royalties. Industry is holding its collective breath over the ongoing review of Alberta’s royalty structure.

Making matters worse the Conservatives also appear to be in trouble on a national level with the NDP again leading in the polls.  A federal NDP win would create much concern over the timely building of desperately needed pipelines–to both the east and west coast of Canada. (And it would delay west coast LNG development by a year.)

To make money investing in this sector you need to be flexible and know where to have your money at each point in the business cycle.

Last year my OGIB portfolio went up by 18% as oil prices plunged by 50%.  Today I’m not running from this second oil collapse; I’m embracing it because I know exactly where to invest my money.

My latest report details the one company–which is listed in the US–that is the best positioned to profit from Canada’s tough spot.  They just announced their second consecutive dividend increase (somebody is making a lot of money off cheap Canadian crude!) Just click here and get ready to profit…..

Next post: Will Investors and the Media Finally Pay Attention to This?

Previous post: Heavy Oil’s Week from Hell–and How to Profit From It