Could US oil production peak…NOW?

The information came out in the EIA’s latest Drilling Productivity Report which was published on March 9, 2015.

The report predicts that US shale production in the month of April will exceed March by only 1,000 barrels per day (bopd). 1000 bopd on 9.2 million bopd overall production is a wash, in my books.

Then only three days later, on March 12, the state of North Dakota announces production from the Bakken Shale actually declined 3.3% to 1.19 million bopd, down from a record 1.23 million bopd in December.

If what the EIA says is true, it is big news and could significantly change the market’s view of future oil prices.  The North Dakota datapoint–which would likely be a small surprise to the Market–was either odd or lucky for EIA forecasters to come out so quickly after their guesstimate. 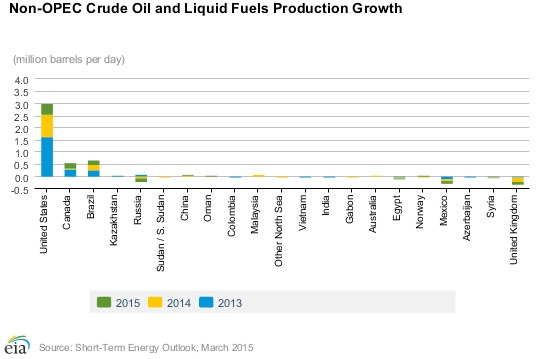 Without the big rise in U.S. shale oil production in the last 5 years, the world could have seen $150-$200/barrel oil and a big global recession.

Because remember, global oil demand marches higher each and every year by nearly a million barrels per day.

Supply and demand have both been freakishly in tandem for the last 15 years; each up by the same million barrels. (It’s hard to believe the huge gyrations of oil prices over this time given how steady the fundamentals are…) That ebbs and flows a bit but we clearly need another million more oil barrels of oil production each and every year.

If U.S. production growth stops—it’s only a matter of time before demand growth quickly overtakes supply.

The EIA’s Drilling Productivity Report is focused on the seven major horizontal oil and gas plays that have been responsible for 95% of the oil and 100% of the natural gas production growth in recent years.

In recent months even the most bullish oil price forecasters were suggesting that US production would not level off until the second half of 2015.

Now here we are still only in the first quarter and—if you believe the EIA—the brakes are already on shale oil production growth. 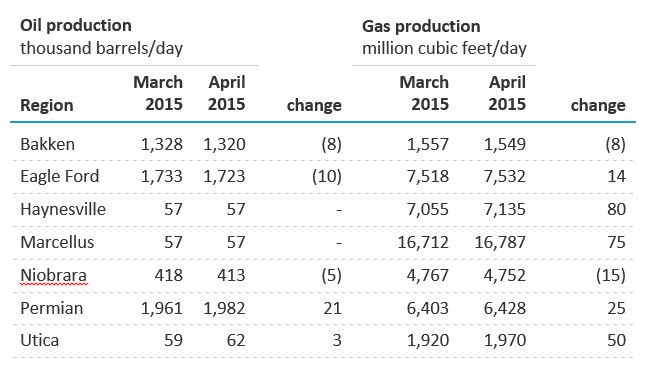 The data in the table above shows that of the three major shale oil plays, only the Permian will continue to grow in March.  Both the Bakken and the Eagle Ford are projected to be declining already.

However, the EIA and its forecasts of shale oil production have been mediocre at best.

Back in December of 2013 the EIA was predicting that US oil production would grow by 1.1 million barrels per day in 2014.

The actual number was 1.6 million barrels of growth—meaning that the EIA prediction was light by 500,000 barrels per day.

But the Drilling Productivity Report is looking only one month ahead and is relying on the known current rig count.  Perhaps this EIA number is much more reliable than an annual prediction?

Fortunately the historical monthly Drilling Productivity Reports are still available to revisit and assess how accurate they were.

To test the ability of the EIA to forecast production just one month in the future I went back and for each month in the second half of 2014 compared what the EIA projected for production from the Bakken with what was eventually reported as being produced.

The source of the Bakken production data can be found through the link below:
https://www.dmr.nd.gov/oilgas/stats/historicalbakkenoilstats.pdf

Here is what I found: 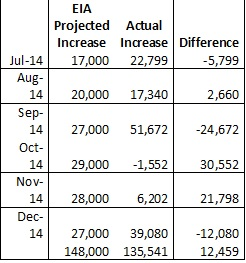 Over the last six months of 2014 the EIA actually overestimated Bakken production growth in the Drilling Productivity Report.

On average from July 2014 through December 2014 the EIA overestimated Bakken monthly production by just over 2,000 barrels.

That actually sounds like pretty good forecasting.  But if you look at each month individually instead of the average, you see the predictions can be wildly off.

What to conclude from this potentially bullish prediction from the EIA?

Probably not a lot; specifically given the accuracy of past one month forecasts.    Oil prices were up a mild 69 cents a barrel on March 9 and down $1.40 on the 10th—so the Street didn’t give this prediction any weight.  Also…US production has continually set new records through February and the first week of March.  So whatever the Bakken is giving up, other producing areas are still growing.

And even if the EIA prediction proves true for April it may take several months of flat production before The Street buys into the fact that the shale juggernaut has really been halted.

But I will say that oil stocks are pricing in higher oil prices—at least $70/barrel.  But the Market does price in events 6-9 months in advance; consensus of a late 2015 halt in US tight oil production could be just as responsible for that.

Certainly very few if any are priced in a manner that would suggest that $50 per barrel WTI will be lower in six months.

I’m sure where oil heads over the next 12 months will be easy to explain after the fact.

For now though, the crystal ball seems pretty murky.

EDITORS NOTE: If oil prices in North America are headed back to $80/barrel, I know which stocks to buy.  In fact, it’s so easy it’s like shooting fish in a barrel.  The reason? You buy the leaders.  You don’t have to think when oil prices are low.  The leaders get rewarded first and the most when the oil price turns. Click Here to find out which companies they are.