Home Natural Gas Why Are These NatGas Stock Charts So Intriguing?

Many of the leading Canadian natgas/condensate producers have exciting (bullish) short term stock charts—just at a time when one fundamental natgas chart looks ominously bearish.  The Big Play for natgas in Canada is the liquids-rich Montney formation on the BC-Alberta border.

It is the Eagle Ford of Canada, with very high condensate levels.  So all the main junior and intermediate Canadian producers are focused there, and are anywhere from 10-50% condensate along with their natgas production.

But after a bit of research I found–these stock charts are likely heading up because of increasing Canadian heavy oil production. That’s counter-intuitive, but hear me out.

First off, I’ll eliminate natural gas as the likely reason for these bullish short term stock charts. The fundamental bearish chart I mentioned in the lead is the Bloomberg graph below which shows US natural gas pipeline flows in billions of cubic feet per day (bcf/d). 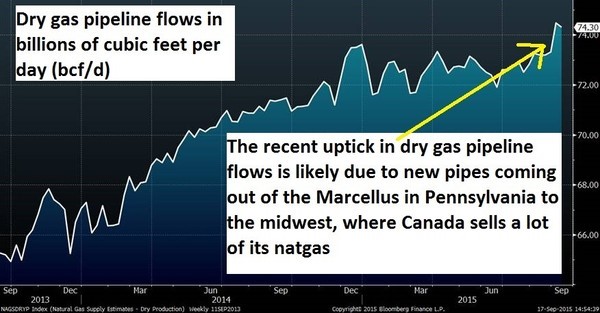 If my comments in the graph end up being true, then that would suggest the cheaper Marcellus gas will soon be displacing Canadian natgas in the US Midwest—which would  mean a larger discount (lower price) is coming for Canadian gas to stay competitive in North America.  And natgas storage on both sides of the 49th are very healthy; not quite burgeoning but close.

So that’s not really bullish at all.  Now, it’s not all bad news–Canada has been shipping a lot more gas down to the US west coast in the last few quarters due to the drought, which is restricting hydro-electric power generation there.  And the EIA is showing a shallow but steady decrease in natgas production across the 7 major US natgas plays.

My suspicion is these charts are moving up because of condensate pricing.  In the US, condensate (or C5 for short as it has 5 carbon atoms) is a pain; everyone wants oil, and C5 trades at a discount to oil most of the time in the US.  But in Canada, it’s an essential part of the energy complex.

That’s because condensate is a very light oil that  is used to dilute Canada’s heavy oil to make it flow in pipelines, and oilsands production is expected to continue increasing in Canada for 3-5 more years—increasing demand for condensate.  Several new deposits are coming onstream right now, including Imperial Oil’s new Kearl deposit. So Canada has a very large and very close domestic demand source for its condensate.  That’s why I think these stock charts are starting to have some bullish set-ups. 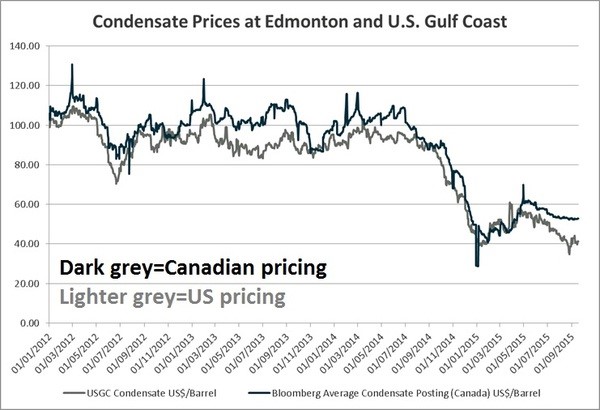 And right now, my network tells me this increasing heavy oil production is creating heavier demand for spot condensate–and making making supply very tight.  In fact, it will likely get tighter through the winter.

That’s because Canada’s heavy oil becomes even more gooey (or viscous, as the industry calls it) in winter with cold temperatures–so it needs even more condensate to dilute it (That’s why condensate is called a diluent).  My very rough math says that equates to an extra 60,000 bopd of condensate in winter, on roughly 3 M bopd of heavy oil production.

So maybe these stock charts have some room to move still.  I’ll show you a few below:

Tourmaline (TOU-TSX) is a bellwether Canadian natgas/condensate producer, with over 100,000 boepd now.  It has completed a near textbook reverse head and shoulders formation, which is bullish: 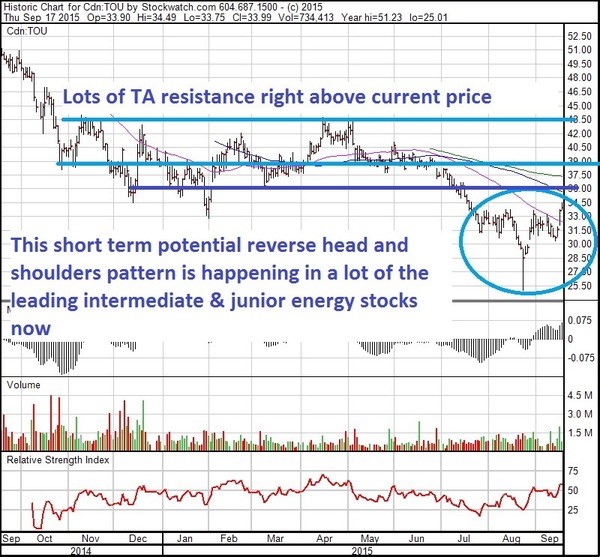 That stock should go first as the leader. Basically, all the leading natgas-condensate stocks have charts that are only a few days behind Tourmaline—think of Dave Wilson’s Kelt Exploration (KEL-TSX), Jonathan Wright’s NuVista Energy (NVA-TSX), and Jeff Tonkin’s Birchcliff Energy (BIR-TSX). 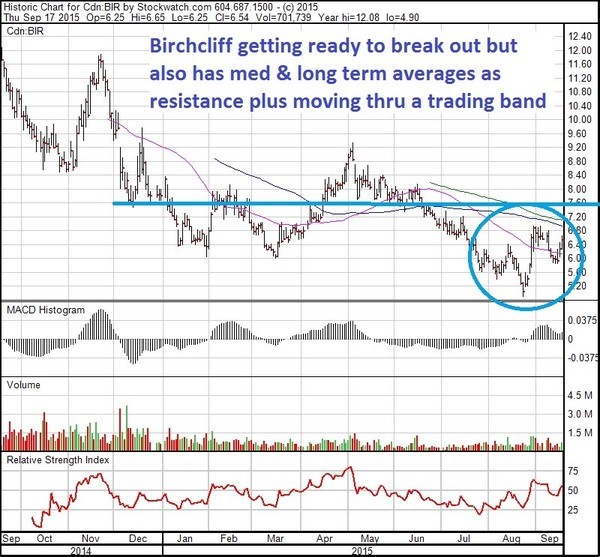 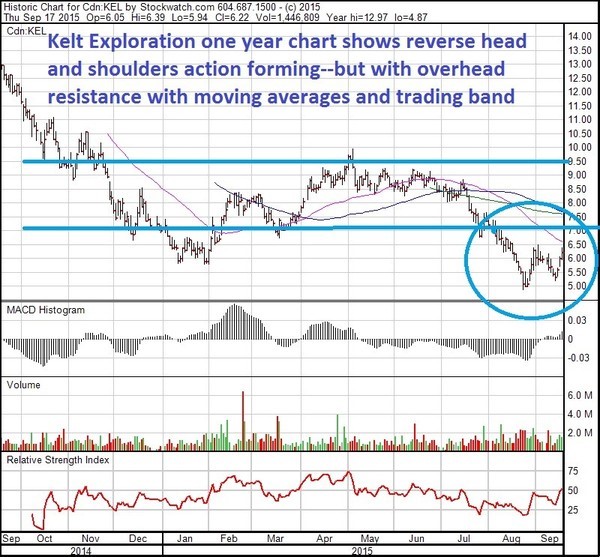 It’s not all good news for investors–when you step back and look at the longer term 3 year chart, it’s clear that a strong downtrend on these stocks is still in place—but for some of them, they’re not far off a breakout.  And they are all trading back up into a months-long band of consolidation which will act as resistance. 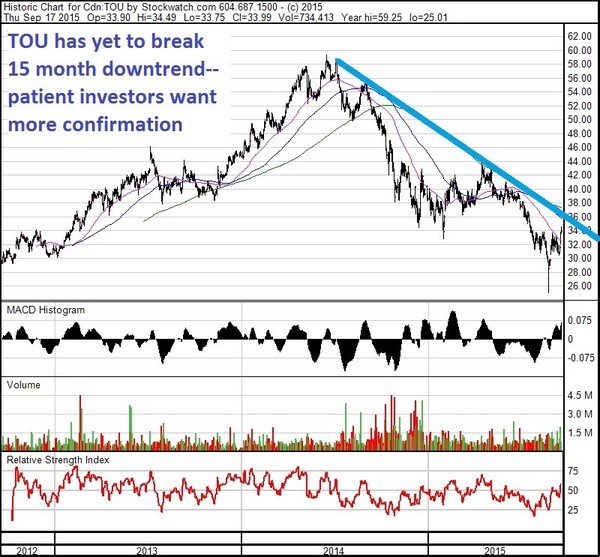 Birchcliff is getting close to breaking its downtrend: 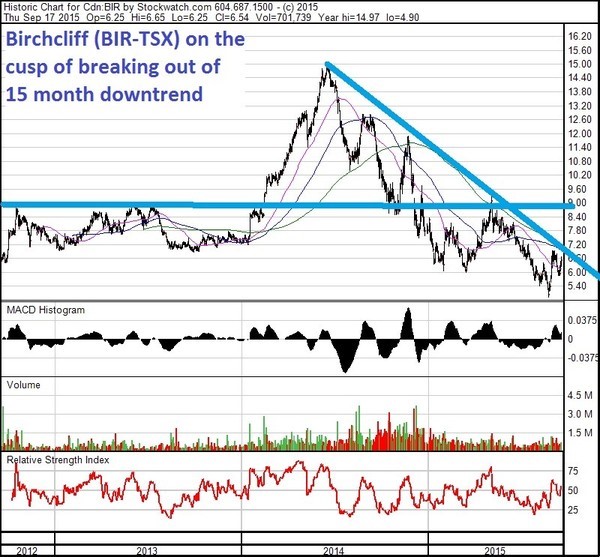 But Kelt still has work to do: 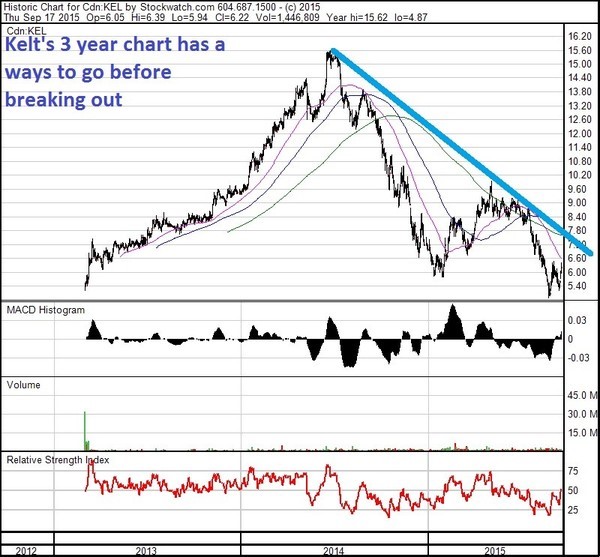 So despite some positive fundamentals on condensate demand and pricing, investors may want to beware trading off short term signals.   But when the energy market gets relatively bullish—as it has a bit coming out of the late August spike down—it’s easy to get caught up in the action.

It’s interesting to see that these “almost” breakouts are also happening in the leading junior oil stocks and service companies.  Of course the question is…can this be sustained…maybe a better way to phrase it is…are these stocks leading commodity prices or following them? 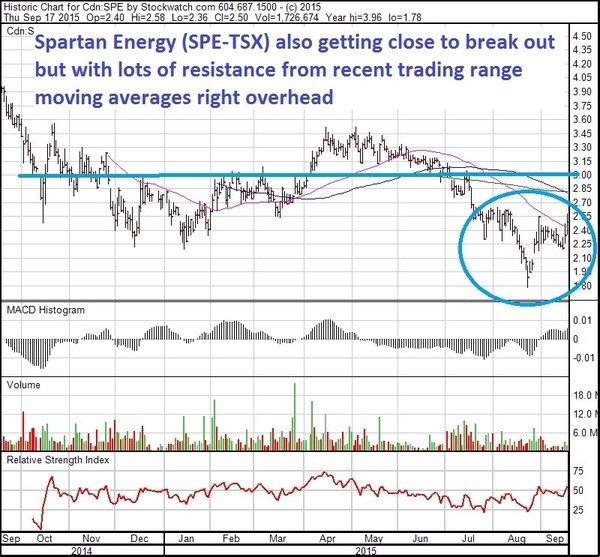 And here’s a chart of Secure Energy, which I would consider one of Canada’s Top 2 service companies. 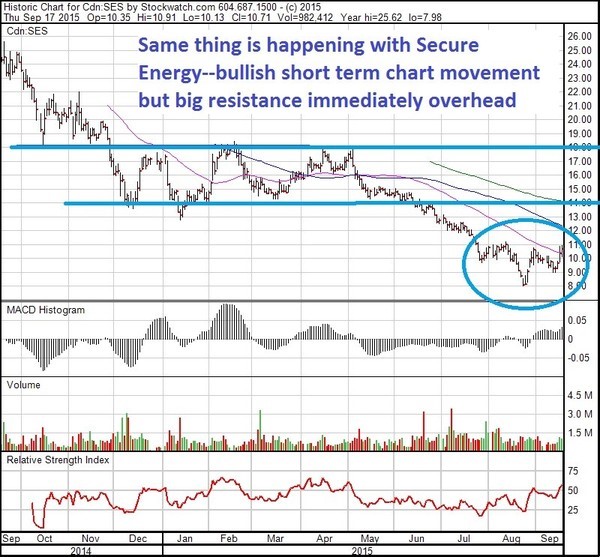 But then swing back to the 3 year charts and the same effect is happening—butting up against strong downtrends and coming into a band of trading that will also act of resistance. 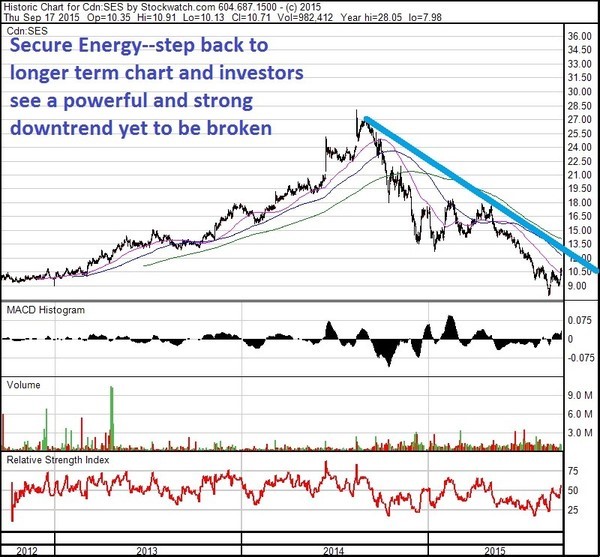 Will increased condensate demand be enough to get these stocks up above their moving averages and through the bands of resistance just overhead?  That’s a tough call–commodity prices are so volatile now.

That’s why I made my largest investment of 2015–in fact the largest single investment I’ve ever made in the history of my OGIB service–into a stock that doesn’t rely on the price of oil.  If anything, lower oil prices help it.  This company is also paying me over 10% yield with a rock solid balance sheet. Read my full report on the company before its next quarterly comes out–Follow this link right now for the full story.