Can the Bakken produce one million barrels a day of oil?

If so, it would join an elite group of oil fields able to produce at that rate. Only six other fields, including Saudi Arabia’s famed Ghawar field, have ever topped 1 million barrels per day–they are Burgan (Kuwait), Cantarell (Mexico), Daqing (China) and Samotlor (Russia) and Kirkuk (Iraq).

The Bakken is a growth story like no other in the North American oilpatch. Less than ten years ago the Bakken was a useless resource, a pool of oil locked away in rocks too tightly packed for our technologies to penetrate. Then fracking technology unlocked America’s shale oil. Today, the Bakken is churning out more than 700,000 barrels of oil per day (bpd).

But a growing chorus of naysayers thinks the Bakken’s days of growth are numbered in North Dakota. These analysts and operators argue that wells spacing is growing too tight, making each new well less successful.

Who is right? Will the Bakken best 1 million bpd? Or is the Bakken’s biggest growth already over?

There’s no clear answer. What is clear is that the North Dakota Bakken is maturing. It’s now perforated with holes, with a well on almost every 1,280-acre unit, (in Canada, we call that two sections) and the name of the game has changed from wildcat exploration drilling to infill holes.

For the naysayers, it adds up to a Bakken story that has lost its edge. But if the optimists are right, Bakken output will climb by another 50% in the next year or two, the formation will earn historic status, and another round of investors will bank many a Bakken buck.

What Goes Up Must Come Down

The geologists with the North Dakota Department of Mineral Resources are tasked with understanding the Bakken – what has happened to the shale formation and what will happen. And their predictions tell a very interesting tale. 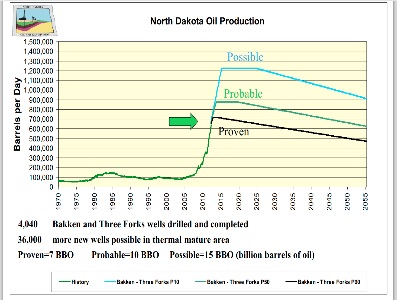 This chart is from a recent department presentation. It shows three possible scenarios for the North Dakota Bakken, all of which show production doing the same thing—but peaking at very different levels.

That’s because the three forecasts describe three levels of certainty. Proven resources are barrels of oil in the ground that have a 90% chance of being economically recoverable. In other words, the black line showing the ‘proven’ future is a near certainty, one that would be derailed only if oil prices fell a lot.

The other two lines show what would happen to North Dakota’s oil output if less certain resources also end up being put into production. Probable resources have a 50% chance of being economic to recover; possible oil carries a 10% chance of being pumped to the surface.

Areas with probable or possible resources have not seen enough drilling for geologists to be sure of the geology, which leads to two types of uncertainty. First, there may be more or less oil than estimated. Second, the oil may or may not be economic to recover – especially since no one knows what the price of oil will be when the resource is eventually drilled.

If oil prices tank or the Bakken reveals a geologic surprise that renders billions of barrels of probable and possible resources economically moot, output will plateau at a lower level, and sooner. In fact, if this prediction is the correct one then production has already peaked, at just above 700,000 barrels per day.

The most likely scenario, based on current information, is the one in the middle: that production will kiss 900,000 barrels per day in 2014, remain at that level for almost a decade, and then start to decline.

Whichever one happens, the message is that the North Dakota Bakken is coming close to its production peak.

“There is that point where the older wells aren’t producing as much and newer wells coming online aren’t as successful, so it does even out and production stops going up,” says Alison Ritter, public information officer with the North Dakota Department of Mineral Resources.

That being said, the North Dakota Bakken likely hasn’t reached its plateau just yet – and even when it does, the region will still be pumping a huge amount of oil for many years.

“If you think about it, two to three years is still pretty far out – we’ve still got a long ways to go as far as the drilling phase of things,” Ritter said. “It’s just that we are entering the efficiency phase, where operators are using more efficient rigs to pad drill, so there are not as many drills turning.”

Putting it into Perspective – The Backstory of the Bakken

The story of the Bakken to this point is of a technological triumph that unlocked billions of barrels of oil.

Until the advent of horizontal drilling and fracking, oil contained in shale formations like the Bakken was uneconomic. There was simply no way to access the oil trapped in those thin layers of tightly-packed rocks.

Horizontal drilling and fracking released the bounty of the Bakken. At first, oil production only inched upwards, in large part because there weren’t enough of the powerful drill rigs needed to frack a hole. But as the number of rigs increased so did the average number of fracks completed per hole, and soon production started to skyrocket.

The chart above shows North Dakota Bakken production, which to date is a pretty good proxy for overall Bakken output even though the formation reaches beyond that state’s borders. 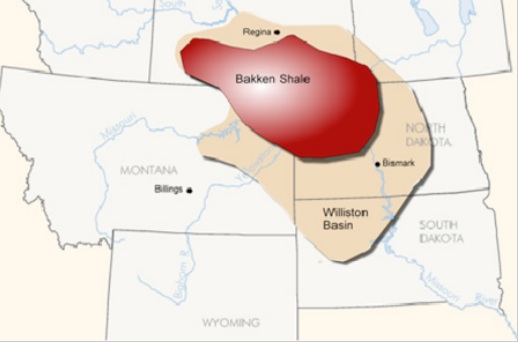 There are three main challenges for the Bakken to reach oil production of 1,000,000 bopd:

3.     The Bakken becomes a victim of its own success—in both geology and economics

There truly is still an immense amount of oil in the Bakken. Original oil in place (OOIP) for the formation stands somewhere between 200 and 400 billion barrels, and production since 1953 adds up to just 503 million barrels.

OOIP is interesting, but what really matters is the amount of oil that can be recovered. If you want to get to 1,000,000 bopd production, you must recover a lot of that oil. The older style, pre-shale, conventional reservoirs have recoveries of near 30% (that’s called the Recovery Factor, or RF) of OOIP.

But in tight reservoirs like the Bakken, the Recovery Factor drops below 10%.

And a Bakken well that starts with a trickle is bad news, because in shale deposits well outputs decline rapidly – along the lines of 40% year-over-year for the first few years.

Wells in conventional oil fields usually decline in a much more gradual manner:

The third challenge is starting to become more apparent right now. In trying to reach 1 million bopd, the Bakken could be a victim of its own success. The Bakken boom took off so quickly that infrastructure could not keep pace, and now there isn’t enough pipeline capacity to move oil from the Bakken to America’s refineries–on the Gulf, east or west coasts.

The result: Bakken oil is piling up in the storage hub in Cushing, Oklahoma. Basic economics say a glut of supply means lower prices – a heavy burden in a place where wells are unusually expensive.

A vertical well into a conventional oil field costs something like $1 million. The Bakken’s horizontal, multi-stage frack wells cost an average of $9 million, according to the North Dakota Department of Mineral Resources.

That’s a huge upfront cost. Each well produces approximately 615,000 barrels of oil, meaning the breakeven price for each Bakken well ends up in the $70-$90/barrel range, once taxes, royalties, and expenses are included. If oil prices slump below that level, a lot of people say Bakken wells aren’t worth the cost.

As the wells in the Bakken grow closer together, initial production rates are sliding. According to some sets of data, average first year well output climbed steadily from 2005 to a peak in mid-2010, then declined almost 25% over the following 12 months.

With more wells tapping into the same resources, there is simply less oil pressure available to each well. And when initial well output starts to fall, an accelerating number of new wells must be brought online to sustain overall production volumes.

Such is the heart of the pessimist argument: that sliding initial flow rates will tag-team with the Bakken’s high decline rates to mean that, no matter how many new wells are drilled, production will stagnate.

Then there are the crowds of optimists who still see many bright days ahead for the North Dakota Bakken. One of those optimists is oil and gas writer Michael Filloon. Filloon says the naysayers are wrong because they generally fail to consider a slew of factors that impact the economic success of a Bakken well, including increasingly effective frac techniques, longer lateral wells, revenues from the sale of byproduct natural gas and natural gas liquids, and cost savings from the shift to pad drilling. (I really enjoy Michael’s articles—if you’re a serious Bakken investor you should read his articles at www.seekingalpha.com)

Exactly when and at what level Bakken output plateaus, one thing is clear: the Bakken is a national treasure. North Dakota is now second only to Texas in terms of state oil production. By 2035, the US Energy Information Administration thinks shale oil could account for as much as a third of US oil production and believes North Dakota alone will contribute 10% of America’s oil needs.

That’s impressive by any measure.

While it’s too early to say if the Bakken can produce 1,000,000 barrels of oil per day, the reality is we should know in the next 2-3 years. Bakken production does best 1 million bpd it will join an elite group of oil fields able to produce at that rate. Only six other fields, including Ghawar, have ever topped 1 million barrels per day.

Even at its current level near 730,000 bpd, the Bakken is a formidable discovery. It has significantly enhanced America’s energy security and generated incredible wealth for investors, landowners, North Dakotans, and state and federal governments. And North Dakota’s Bakken will continue to pump impressive volumes of light, sweet oil for many years.

But whether in a year or three, and whether after reaching that million-barrel mark or not, North Dakota’s Bakken boom will soon plateau. That, my friends, is simply the nature of resource extraction – the Bakken bounty just can’t last forever.