A New Trend that Could Affect Natural Gas Pipeline Stocks

The stocks of natural gas producers have been hit hard by the low price and bearish outlook for the commodity. But a new report from Denver-based energy analytics company BENTEK makes me think natural gas pipeline stocks, pipeline MLPs and pipeline ETFs/ETNs in the U.S. could come under big pressure in the coming weeks.

And their stock charts are agreeing with me.

Bentek’s report — “West Absorbs Marcellus Shale,” and just released on Thursday — says that the northeast US, the most lucrative retail gas market in North America, can be fed mostly from fast rising natural gas production out of the Marcellus shale —  a “local market” for that shale deposit.

If fact, with so many new shale gas deposits—located all over the U.S.—now every market can be served with “local” gas, greatly reducing the need for pipelines. Dividend paying pipeline companies have been some of the best performing stocks for resource investors, but the shale gas supply glut may drag them down now as well.

“From a fundamental and market point of view, it doesn’t bode well for those (gas pipeline) flows to remain high, due to growth in eastern shales,” says Bentek’s Sheetal Nasta, one of the authors of the report.

“We have local supply to serve local demand, not just in the Northeast, but in the Midwest, with the EagleFord and Granite Wash plays. Local production will serve local demand and long haul pipes are losing favour because of that.”

That is not good news for companies like Kinder Morgan (KMP-NYSE) which just spent $4.4 billion on the new REX pipeline that goes from Wyoming to Ohio—or for TransCanada Pipelines (TRP-NYSE; TRP-TSX), with its main gas line from Alberta to Sarnia Ontario.  To their benefit, many of these companies have long life contracts that get them through market swoons.

The listings I saw affected most in Friday’s trading were the Alerian ETF and ETN products:

They were NOT textbook reversals on Friday, but they were larger than normal downdays. (Each of these 3 is down again today.) 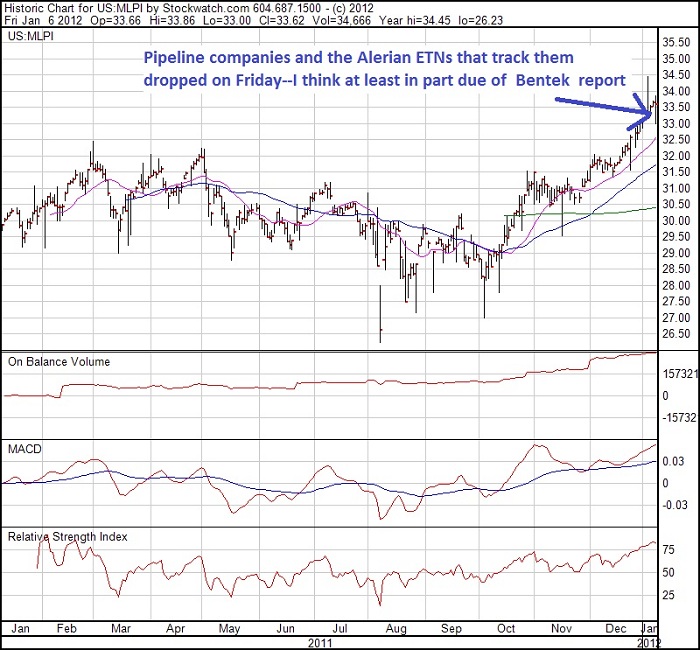 Two of the largest pipeline companies in the US also broke stride with recent uptrends after the Bentek report came out. Kinder Morgan’s KMP-NYSE listing had its biggest intraday drop since the market crunch of early October. Enterprise Partners (EPD-NYSE), also had a large intraday drop, but it was not as unusual. (KMP and EPD are both down today.)

The reason pipelines exist is to take low price supply to higher priced demand. But the huge supply has depressed gas prices everywhere in North America, so there is little to no price spread on gas between the various hubs in the US. And for the first time in history, some price spreads have gone negative, says Nasta.

“Westbound flows on Ruby (the new Ruby pipeline moves gas west, from western Wyoming to Malin Oregon, on the California border) picked up in November and eastern REX flows dropped off (REX takes gas east, from eastern Wyoming to Ohio).”

The reason REX gas flows dropped was because of all the new gas production out of the Marcellus shale—the east just didn’t need near as much western gas.

“Demand in the west absorbed that incremental gas,” Nasta continues. “Due to a combination of mild demand in the east and increased production in Marcellus, prices on east side of the US (the Dominion South hub in Ohio) got really weak–and the spread between east and west went negative.

“That is historically unusual.  It wasn’t that long ago—a couple years–the price spreads between those two hubs were over $1 (per thousand cubic feet, or mcf).  But I don’t think it’s ever been negative.” 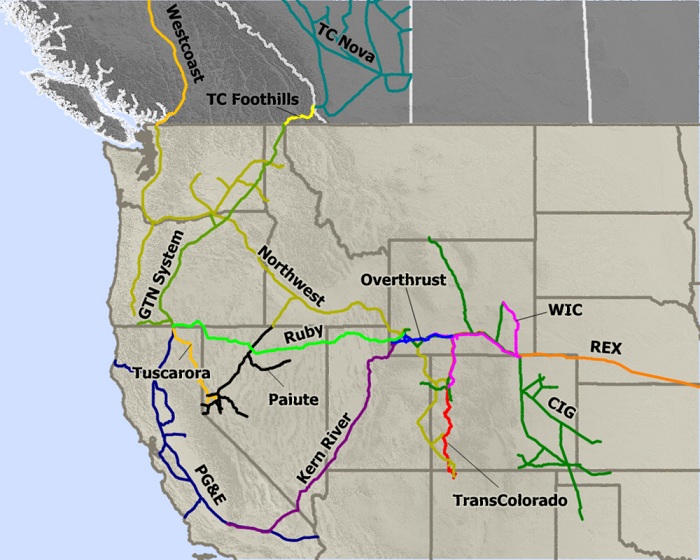 “Spreads across the country are flat. We don’t need long haul gas.”

For high REX volumes to keep flowing, she says, the gap, or spread in prices between Wyoming’s Opal hub and Ohio’s Dominion South hub have to widen out again—meaning the western Opal gas price has to get weaker.

But gas production in the Wyoming area is flat; no growth. Combine that with increased pipeline capacity to get gas out of Opal—thanks to the new Ruby pipeline that just started in 2011—Nasta says she doesn’t see Opal’s gas basis falling much anytime soon.

So not only is there a lot of gas, it’s everywhere, reducing the need for pipelines, and that’s all coming at a time when a lot of pipelines have been built. Pipelines are like any other commodity; their pricing goes by supply and demand. It appears that local supply is going up and long haul demand is going down. Competition is almost certainly going to bring pipeline prices—the toll charges they give gas producers—down.

For resource investors, and income investors, pipeline stocks have been a steady to good performer. But if Bentek is right, I see their multiples—if not their actual dividends—being reduced if current trends in the gas market keep going the way they are.

Here’s a link to the Bentek report.

There is a Canadian angle to this story as well, which I’ll cover in more detail in an upcoming OGIB Free Alert.  Meantime, you can read my original story on how all the new US gas pipelines have displaced Canadian natural gas.  Click here for the OGIB report on REX – the Rockies Express Pipeline.

DISCLOSURE:  Keith Schaefer is neither long nor short any of the companies mentioned above, and has no intention of initiating a position.

Next post: The Risk & Opportunity in Precious Metals Stocks