The size of the prize in the giant Duvernay Shale is BIG—Canadian brokerage firm CIBC Wood Gundy said in a June 14 report the oilpatch could recover 2-5 billion barrels of liquids and 150 TRILLION cubic feet of gas.

Who are the junior and intermediate stocks that have the most exposure to the giant Duvernay Shale?

Two charts below tell the tale. The first outlines just raw acreage positions. The second table below—two months old now—shows how limited the drilling has been in the Duvernay but highlights the land positions of the active players in the Duvernay. 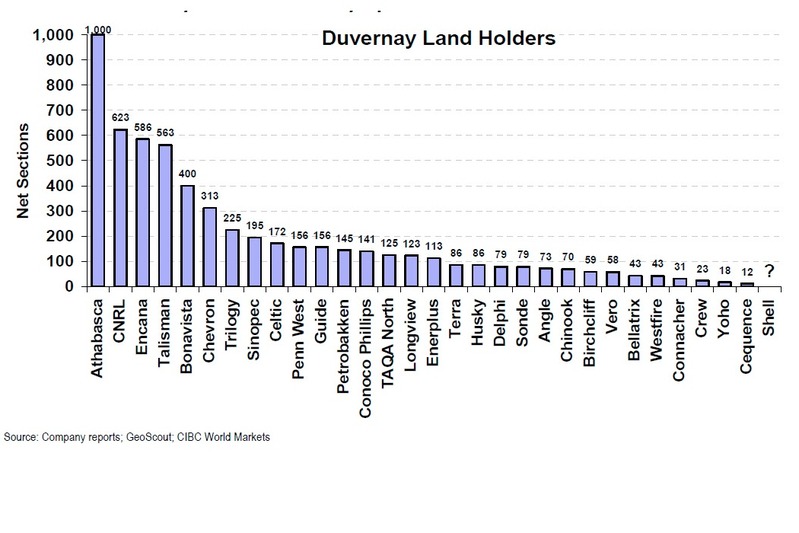 BMO Capital Markets (Panel Discussion on the Duvernay May 16, 2012) 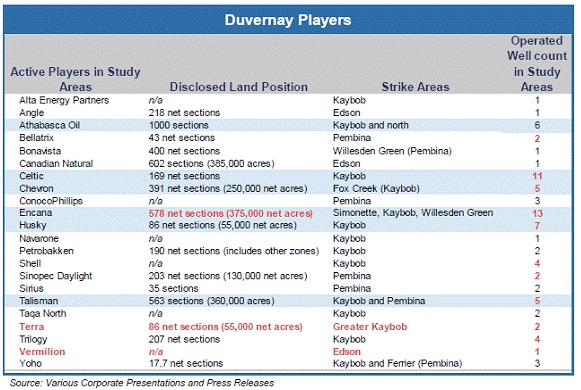 There are some intermediate producers in the Duvernay play, such as Yoho Resources (YO-TSXV), Celtic Exploration (CLT-TSX), and Trilogy Energy Corp (TET-TSX) (33% partners), and Bellatrix Explorations (BXE-TSX) and Athabasca Oil Sands (ATH-TSX). Not only have they active in the Duvernay, they’ve been more transparent about their results.

The map below from Yoho Resources shows recent Duvernay drilling activity into the Kaybob area of northwestern Alberta. The Kaybob area is one of the richest liquid rich areas in North America just in the Montney play, which sits above the Duvernay here. The Duvernay makes this area some of the sexiest, most prolific acreage on the continent. 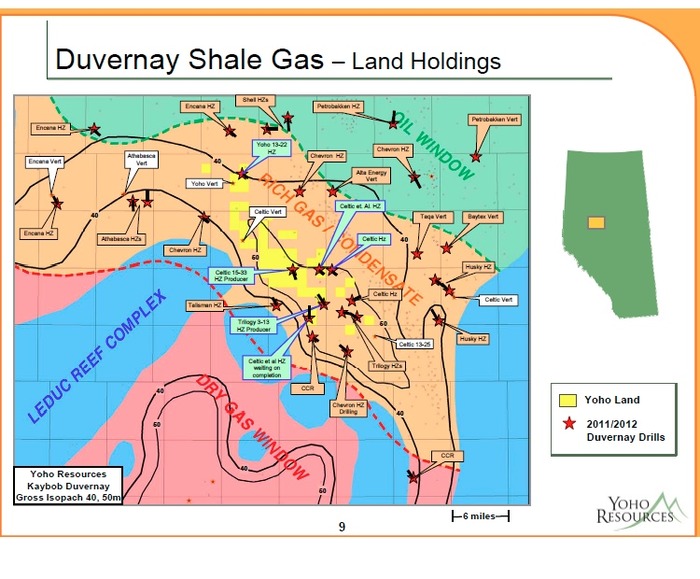 In the Kaybob area Trilogy Energy, Celtic Exploration and Yoho Resources each have a 33% interest in various Duvernay rights.

Since 2010 the partnership has drilled four wells into the Duvernay with three on production and one waiting completion. Of the three producing wells, two tested between 930 to 1830 boe/d. The first was significantly less because it only received six of 13 frack stages.

In particular Trilogy Energy has been one of the most active smaller players in Duvernay exploration. Trilogy has over 200 net sections of ‘prospective’ (what they think has the Duvernay) Duvernay acreage and plans to spend $40 million in the Duvernay in 2012. Trilogy plans to continue with its partnership in the Duvernay and also drill two (100% interest) wells in 2012.

The Most Recent Duvernay Data (from the juniors)

As of April 2012 the two most recent Duvernay well results to come into the public domain have been from Bellatrix Exploration and Athabasca Oil Sands. Bellatrix was drilling in the gas/liquids window and Athabasca in the oil window.

Bellatrix Exploration drilled its first horizontal well into the Duvernay, to a measured depth of 4,700 metres with a 1,200 metre horizontal leg and 15 frac stages. Total well costs were $10 million according to ScotiaBank Equity Research.

Bellatrix reported that its first Duvernay well flowed dry gas at a restricted rate of 5.6 mmcf/d for the first 30 days. However, National Bank stated that the well had initial flow rates as high as 10.0 mmcf/d.

A research note by AltaCorp Capital reported downhole pressure on this well at over 9,000 psi (this is a very high and will likely lead to a large gas resource in place). AltaCorp also noted that management expects upwards of 4.3 – 4.5 tcf of resources across their 43 net sections of Duvernay rights. Assuming a 30% – 40% recovery rate, that would be ~1.2 tcf net to Bellatrix.

Most analysts believed that after the frack fluid clean-up is complete, this well could flow liquid rich gas in the neighborhood of 30 bbl/mmcf.

While 30 bbl/mmcf is ‘OK’, it is not what Bellatrix’s management expected. Most analysts believe estimates were somewhere between 70 -100 bbl/mmcf, which is similar to the Trilogy/Celtic/Yoho Duvernay wells which are flowing between 75 – 110 bbl/mmcf of liquid rich gas.

The other most recent Duvernay well result that has been released came from Athabasca Oil Corp. (note the recent name change from Athabasca Oil Sands). Athabasca’s Duvernay well is located in the Kaybob area as well and had a reported flow rate of 650 boe/d over a 16 day test period. This flow rate breakdown in their news release was 390 bbl/d of light oil (44 API) and 1.5 mmcf/d of gas.

The drilling costs for Athabasca were $5 million and the completion (fracking) costs added an extra $10 million. Given the high price tag, ScotiaCapital said the economics would be marginal at best. However Athabasca believes it can get total well costs in down to $10 – $11 million.

The report also noted that this “is the first light oil strike in the play.” If Athabasca can prove that the Duvernay can be as much an oil play as a gas play, the size of the prize becomes that much more dynamic. You can bet industry will be closely monitoring the well data over an extended period of time to calculate some long term economics.

BMO Capital Markets even believes that Athabasca could announce a Duvernay JV this spring/summer to validate the capital they have spent so far.

It’s still early days in developing the Duvernay, and the industry is still in its learning curve on how to get oil and gas out profitably, and consistently.

In the remainder of 2012, Duvernay data will be a hot commodity. CIBC Wood Gundy says 50 Duvernay wells have been spud to date, and 14 wells reported to date have a median liquids yield of 80 barrels per million cubic feet of gas (bbl/mmcf/d).

Wells coming off confidentiality status will be closely monitored. Good Duvernay results could lead to big dollar joint ventures, or even outright purchases of junior companies by the intermediates or seniors.

Indeed, if there is consistent good news later this year, expect to see M&A activity pick up a lot. The seniors in the Duvernay have a lot riding on the economics here, and that could be great news for shareholders of junior and intermediate stocks with big Duvernay land positions.